Skip to content
Breaking News
Breaking News
Primary Election Results
This is an archived article and the information in the article may be outdated. Please look at the time stamp on the story to see when it was last updated. 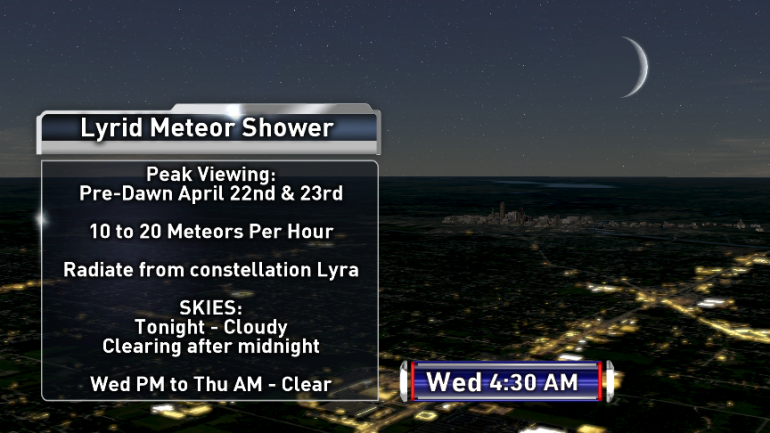 DES MOINES, Iowa – The Lyrid Meteor Shower is underway and the shower is about to reach its peak. Iowans will get a chance to see the celestial sight by early Wednesday morning. The Lyrid Meteor shower began on April 16th and continues to the 25th. However, peak viewing times will be the morning of April 22nd and April 23rd. On occasion, the Lyrid’s may produce brief bursts of 100 meteors an hour, especially during the peak mornings. For the most part, there are 10 to 20 Meteors per hour during the peak times. Lyrids often have long trailing tails.

Meteorologist Megan Salois said that skies may be cloudy for the first part of tonight, but clouds should clear after midnight over Central Iowa. This should allow for viewing of the meteor shower early Wednesday morning. Skies will also be clear Wednesday night through Thursday morning, which is also part of the peak time frame for meteors. You will need to dress warmly, as Megan says, “Temperatures will drop to the low to mid 30s across Central Iowa both mornings. There may even be frost in western and northern Iowa by morning.”

The Lyrid Meteor Shower gets its name as the shower occurs near the bright star Vega in the constellation Lyra. The star, Vega, will rise after 10 p.m. in the northeastern sky. We have a crescent moon right now, so moonlight should not inhibit viewing. The best timing will be before dawn each morning.