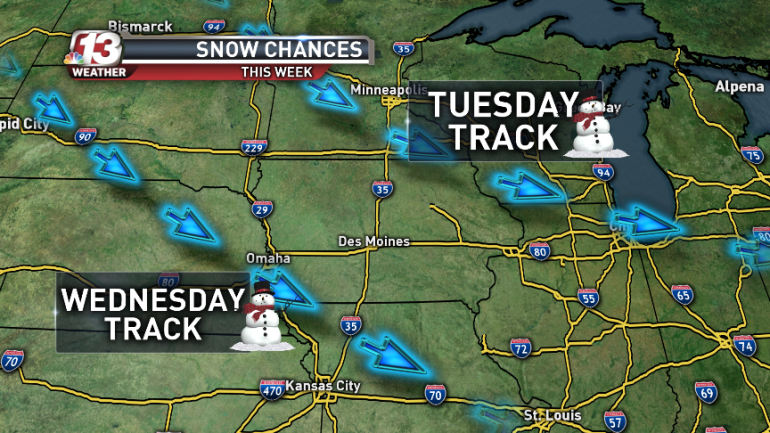 DES MOINES, Iowa – As you finish digging out from this weekend’s storm, WHO-HD meteorologists are monitoring two systems that could bring snow to Iowa.

“Weak disturbances will move through parts of the state from the northwest during the next few days,” Meteorologist Megan Salois said.

The first system will move through on Tuesday. Dry air over the state and it’s fast movement should limit snowfall totals. “The path looks focused on far northeast Iowa and will move in from Minnesota Tuesday afternoon and exit the state late Tuesday night,

Salois said. “Totals of less than two inches are expected from Mason City to Waterloo and off to the north. This should have minimal impacts on Central Iowa.”

The second disturbance on Wednesday will be more vigorous.

“Forecasts have been consistent with an area of 1-4″ of snow falling from northwest to Southeast,” Salois said. “What hasn’t been consistent is the path. Right now, the trend is to take it across Nebraska and through southwest Iowa to Missouri. This would have the biggest impact on towns including, Creston and Lamoni, staying southwest of Des Moines. However, the track may slide farther north and could bring some of that snow to the metro, or the track could still slide further southwest and avoid Iowa all together.”

Stay with Channel 13 News, who13.com and the 13 Now app as we continue to monitor the systems.

Central Iowa will experience the hottest day of the year so far with heat index values above 100° in many cities Wednesday. A Heat Advisory is in effect for most of central Iowa (especially east half) until 8 PM as it will feel like 100-105°.

Forecast highs are in the middle 90s today. When the temperature outside is 90°, it only takes 30 min for a car temperature to rise to 124° when the air is off. Below is a graphic from San Francisco State University showing how fast the inside of a car can warm up when the air is off and the windows are up. On a day like today, it only takes one hour for the inside of a car to climb to near 140°.