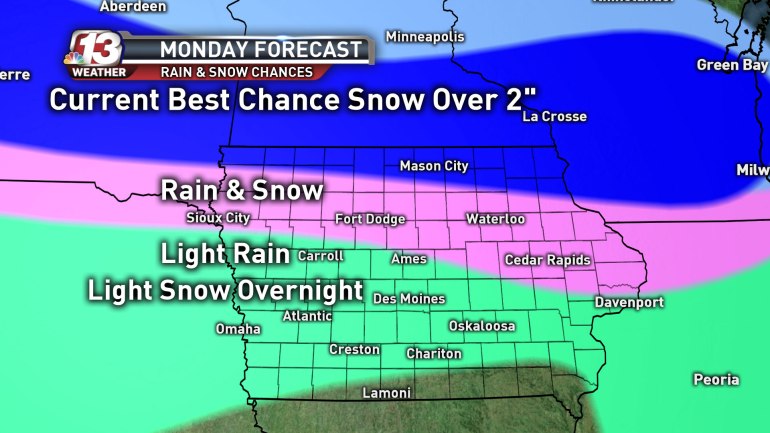 DES MOINES, Iowa – It’s not officially winter, but we could see our first taste of winter weather this weekend, according to Channel 13 Meteorologist Brett McIntyre.

The forecast will remain relatively quiet through the weekend, aside from some gusty winds and cooler temperatures on Saturday. High temperatures Saturday will struggle to warm up much past the mid-40s thanks to a northwest wind that will gust over 30 mph, particularly in the morning. Winds will die down later in the day and allow more moderate temperatures, near 50, on Sunday.

Throughout the day Sunday two storm systems will combine to set the stage for some potentially messy weather that will result in some unusually cold weather for November. One area of low pressure near Hudson Bay will work to funnel the jet stream and its freezing temperatures into the Upper Midwest, while another low spins in Nebraska and pushes milder air into Iowa.

These two storm centers will sharpen a cold front across the Dakotas and into NE Iowa that will end up being the focus for potential accumulating snow on Monday. The biggest impact for the state as a whole will be a sharp drop in temperatures with highs for much of next week around 20 degrees below normal. The cold will likely extend all the way to the Iowa/Missouri border, with very low chances of seeing temperatures near normal until at least next weekend.

Gusty north winds will accompany the cold air and wind chills could dip as low as the single digits by Tuesday and Wednesday mornings.

As for the snow, the best chances for significant accumulations do appear to stay to the north, though the eventual track remains in flux. The main piece of energy that will trigger everything remains as part of the storm affecting Alaska and the Bering Sea and will not be on shore and into the weather balloon network until Sunday afternoon. At that point, snowfall amounts will begin to come into focus, as well as any major changes to the forecast.

That being said, southern Minnesota looks to take the brunt of the snow with this storm, with a mix of precip and minor snow accumulations possible south to Highway 20. From 20 to I-80, rain showers are likely, with a possible changeover to light snow late Monday into early Tuesday. Be sure to check back this weekend at the track becomes clearer.

A Red Flag Warning is in effect for Northwest Iowa through 8 PM Wednesday Evening. A combination of dry air, dry ground cover and strong winds is leading to the fire danger.

Winds of 20 to 30 mph with gusts up to 45 mph are expected to continue through 8 PM tonight. Relative humidity is as low as 25% with dew points in the 30s and 40s indicating a very dry air mass. Grasslands and crops around the area are mostly cured and able to burn easily. Any fire that starts this afternoon or evening could burn rapidly and become uncontrollable.

Attorney: Iowa Saying No to Demands Only Emboldens Former Players