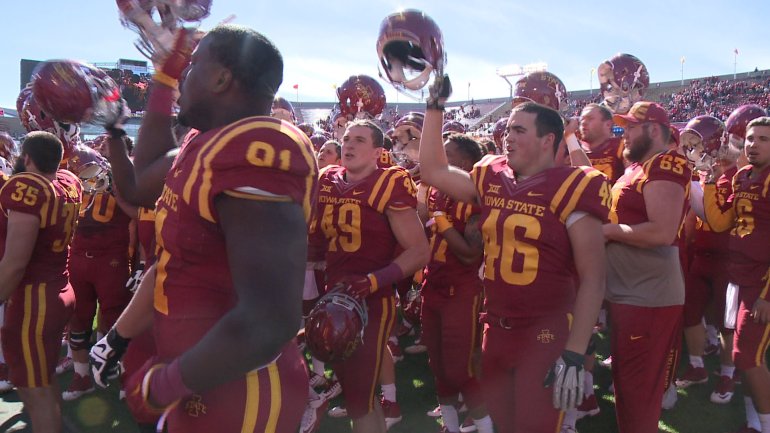 Campbell announced on Wednesday that five players have signed letters of intent with Iowa State University. The players, who will begin school at second semester, include a tight end, two defensive backs and two offensive linemen.

In a one-on-one interview with Channel 13 Sports Director Keith Murphy, Campbell said he will sell recruits on many different aspects of the school, including the fan base, educational opportunities, and athletic facilities on campus.

Below are quotes from Campbell about each player, and more information can be found by clicking on their name.

“Oge is a big, strong, powerful offensive lineman. He grew up playing soccer, but now obviously 300 pounds later, he’s a big, powerful, strong, young man. This is a huge get for us. He’s a young man that I think will be an automatic challenger for a starting spot on the offensive line. His team won the national championship this year in junior college football. He knows how to win and certainly a young man that brings some interesting tangibles. He’s really strong, very powerful, and I think a man that has high-end ability and can certainly play at this level.”

“Clifford is a young man who had taken his visit to Iowa State before we had gotten here but, even when we were at Toledo, we had known about. He came highly recruited right at the end of this recruiting process, but his loyalty to Iowa State stood firm. He was blown away by the Iowa State community, and certainly really blown away with the academic setup we have, which was really the final selling point. He is 6’ 5”, 260 pounds and a guy that’s got a really good upside at the tight end position. He has a great passion for the game of football. He also played basketball a year ago, so I think you will see a lot of athletic ability in him. We can’t wait to get him into our strength and conditioning program, and we are really excited to see what he is able to bring to the table. He is very intelligent and a very physical football player, and I think once he gets here, we will see his ability right away.”

“Karson was a qualifier out of high school. He grew up in small-town Oklahoma and is a young man who loves football. He has really reshaped his body. He was almost 345 pounds and now he’s down to 290 pounds. He was really sought after here the last six days. He comes from a great family and has the attributes we are looking for on the offensive line: attitude, effort, toughness. He can play both tackle spots and also has the athletic ability to play center as well. We are excited that he said yes to us, and he’s a guy who plays with a chip on his shoulder. He was looking for an opportunity to come in and compete right away. It will be a huge six months for him as he continues to develop his body and strength, but he has already done a great job with that.”

“What I love about D’Andre is his competiveness. I think what you’re going to see from this young man is a high-end competitor and a guy that has tremendous coverage skills who can cover both in the slot and can go outside. He has great length even though his height may not show it. He has a long wingspan and his cover ability is elite. He’s a guy that brings true competitiveness and knows how to win. He’s a young man that I’m really excited about. He brings toughness and depth to our secondary, and has the skills to match up with receivers all over the field.”

“If you would have been there when he called and said yes to our recruiting room, you would have seen the recruiting room shake. That’s how excited we were. Thadd is a young man that embodies what you look for in terms of secondary play. He gives us some versatility. He can play safety and corner, and is a really strong, physical football player. He’s a guy that can play multiple positions and is very mature beyond his years. His father passed away two years ago and has taking over many family responsibilities. He has kind of been a father figure to his mother and his brothers and sisters. He’s just a young guy that has a passion to be elite. I’d say that in the secondary it’s a lot like recruiting a quarterback today in the game of football. Those guys have to be special. They have to be communicators, they have to do a great job getting guys lined up and also have a passion for themselves, and Thadd has that.”

DES MOINES, Iowa – The state’s largest school district has announced it will allow its high school baseball and softball teams to compete this season.

A post on the Des Moines School District’s website Wednesday said practices will resume next Monday, June 1st. Details on the start of competition in the CIML are still being finalized but games are expected to start June 15th.

Iowa State athletic director Jaime Pollard is telling Cyclones fans that football home games will be played at no more than 50% capacity at Jack Trice Stadium, pending a change in state and local health guidelines. That means no more than 30,000 fans.

Pollard made the announcement in a letter posted to the ISU athletics website Tuesday.