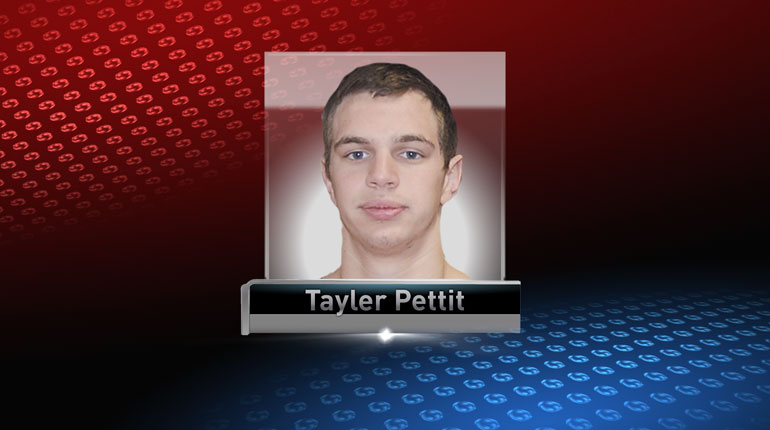 Wednesday, the senior collapsed after his match during the State Dual Team Championships. Medics on scene say Pettit had a seizure then became unresponsive. They used an AED several times shock Pettit’s heart into beating again.

Pettit’s parents, Scott and Melissa released a statement expressing their gratitude for support and explained what happened.

“Tayler’s heart did not fibrillate from a blow to the chest during his wrestling match and it had nothing to do with maintaining or losing weight. The test found an extra electrical pathway in his heart that caused a rapid heart rate.”

According to the family, cardiologists say Pettit suffers from Wolf – Parkinson – White syndrome, a defect that had gone undetected. Pettit underwent surgery to help correct and reduce the potential for future problems.

“We never knew Tayler had a heart issue and the cardiologist said he could have had it since he was born. We were told the syndrome is the most common cause of rapid heart rate disorders, especially for infants, children and adolescents.”

Below is the entire statement:

“Our son Tayler and his teammates from Creston Orient Macksburg (COM) were focused on bringing home a state team wrestling championship when they took the mat in Des Moines on Wednesday. Shortly after completing his second match Tayler complained of shortness of breath to trainer Chris Leonard, assigned to the team by Greater Regional Medical Center, and COM head coach Darrell Frain. Tayler collapsed, experienced seizures and went into cardiac arrest. Within seconds an Iowa High School Athletic Association team of medical professionals staffing the tournament joined Chris and Darrell and began helping Tayler as he began fighting for his life. Paramedics, trainers and physicians started CPR and tried to revive him. An AED was available in the arena and was used to shock his heart back into rhythm. We believe this rapid care and always having someone with Tayler saved our son’s life.

The biggest question for us was how did this happen? As a three sport athlete Tayler had never experienced seizures or heart problems. The physicians at Mercy Children’s Hospital Pediatric Emergency and the Pediatric Intensive Care Unit started care and used a respirator to help him breathe while a cardiologist monitored his heart. By Wednesday night they were able to remove his breathing tube and we discussed testing.

The tests were performed Thursday by Iowa Heart Center cardiologists and they found the cause. Tayler’s heart did not fibrillate from a blow to the chest during his wrestling match and it had nothing to do with maintaining or losing weight. The test found an extra electrical pathway in his heart that caused a rapid heart rate. The cardiologist called it Wolf-Parkinson-White Syndrome. We never knew Tayler had a heart issue and the cardiologist said he could have had it since he was born. We were told the syndrome is the most common cause of rapid heart rate disorders, especially for infants, children and adolescents.

Friday, Tayler had a surgical procedure called an ablation to correct the extra electrical pathway and reduce the potential of future problems. He has continued to gain strength and our cardiologist said Tayler should have a complete recovery and be able to return to sports and play soccer this spring.

We are overjoyed by the outcome but it would not have been possible without all of the support, prayers and caring from our wrestling community and people we don’t even know. You have all given us strength.

We’d like to thank our trainer Chris and our coach Darrel; for not leaving Tayler alone for a second. We thank the Iowa High School Athletic Association for its medical planning and assembling a great medical team to deal with injuries, or in this case a life or death emergency. The physicians and staff with Mercy Children’s Hospital Emergency and Intensive Care Units provided great care. Our cardiologists with Iowa Heart Center at Mercy helped us understand Tayler’s heart problem and fixed it.

As parents, our experiences made it very clear how important it is to have an AED available and know how to use it. AEDs can save lives and we can’t imagine not having them readily available at athletic, school and community events. We hope everyone will learn more about these devices so you can help someone should they experience a medical emergency.”

WASHINGTON -- The Washington Redskins are formally taking a hard look at their team name as many decry the name as racist against Native Americans, multiple sources confirmed.