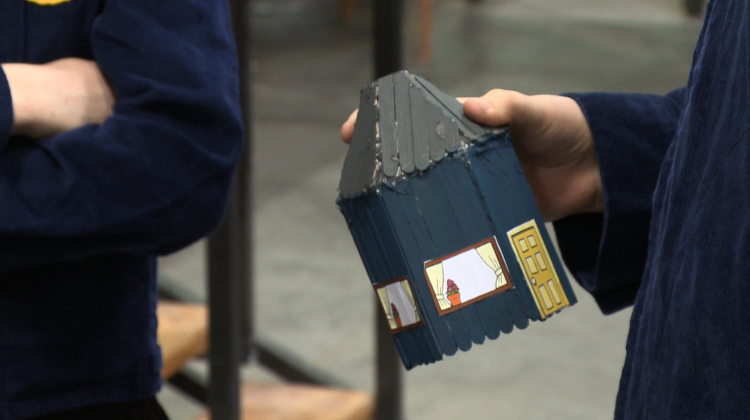 AMES, Iowa – As tornado season sets in, two sophomores from New Auburn High School in New Auburn, Wisconsin, are hoping their project could save homes and buildings from being uprooted from the ground in the midst of a severe storm.

Cody Simmons and Fred Runnings are in their school’s Future Farmers of America organization, where they’re preparing a project to present at the state-wide convention in June. Simmons says he wants to pursue a degree in meteorology after high school, and so he wanted to focus on a project involving storms and structures.

“We have cables running through the walls of the house, and through the roof structure,” Simmons said. “But if we were actually to build this full-scale, the cables would be coming down through here and they would be going into the ground as anchors. It would just kind of give it more stability when the wind speeds pick up.”

The two students were invited to Iowa State University Friday morning to test their prototype in the school’s Tornado Simulator. Simmons says their cable system worked well with the prototype during testing, and now the data will be sent back to their school. From there, the two plan to continue work on their project, and present it, as well as the data from Iowa State University, at the FFA convention in June.