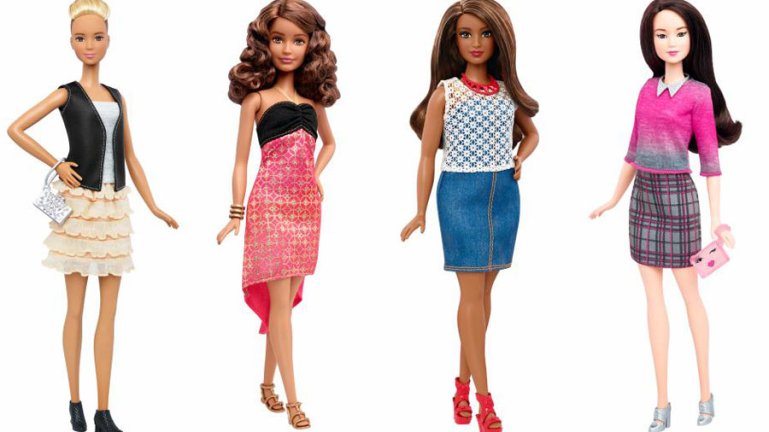 When did dolls become role models?

This question became the cynical undercurrent to news that Mattel unveiled new Barbie dolls in three new body shapes — petite, tall and curvy — and seven skin tones. The original Barbie is still for sale as well. While parents and fans of the iconic blonde bombshell cheered the toymaker for making dolls that look more like real people, others couldn’t help rolling their eyes at what they saw as a last-ditch effort by Mattel to regain market share as Barbie loses ground to other dolls.

Actress Kirstie Alley emerged as a voice from this camp, asking on Twitter if the celebrations “seriously” implied that “Barbie needs to be taken seriously.” She stood her ground as people challenged her, reiterating the point that she does not “consider toys to be role models.”

“I prefer humans,” she said. “Apparently it is now politically incorrect to make wisecracks about dolls now in America… hmmm and I thought they were just toys.”

She’s definitely not alone. Various news outlets fired off hot takes questioning Barbie’s influence with such headlines as “Barbie is Past Saving” and “Did You Really Feel the Need to Identify With Your Barbie?” Some argued that Mattel took too long to catch up to other doll makers that have already made inclusiveness a selling point, and Barbie’s moment is over.

“The trouble with Barbie is that if you start taking away her unrealistic elements, she disappears altogether,” Alexandra Petri wrote in the Washington Post.

“Barbie is either the iconic, unattainable figure, blonde and waiflike, with huge eyes, or she is — what, exactly? Make her real, and she ceases to exist. She becomes a brand, a category heading, like American Girl, Monster High, Bratz.”

Among the critics, no one seems to be objecting to the idea of curvy Barbie, a petite Barbie or an Asian Barbie with distinct features from “original Barbie.” It’s more that, as VH1’s Taylor Ferber put it, “I can’t honestly say that the plastic toy I played with was something I ever wanted to look like in real life. Primarily because Barbies aren’t real life.”

All of that is well and good, except that decades of research show that children do absorb messages about body image and identity from toys and play, though studies also show that different kids identify in different ways and that countervailing influences can minimize the impact.

As recently as 2006, a British study found that “girls exposed to Barbie reported lower body esteem and greater desire for a thinner body shape” than those who had been given dolls reflecting larger body types or no dolls at all.

“What people forget is all toys are educational to children, and girls learn what it means to be a girl through the toys they have,” said University of Kentucky psychology professor Christia Spears Brown, author of “Parenting Beyond Pink and Blue: How to Raise Kids Free of Gender.”

“I don’t think what Barbie looks like is a trivial issue,” she said.

Mattel has made changes in recent years to address criticism of Barbie’s unrealistic proportions and ethnocentric image. Mattel introduced Entrepreneur Barbie in 2014 and expanded the number of available skin tones, eye colors and hair styles available in June 2015.

It’s more than simply putting a lab coat on the same busty, cinch-waisted doll, or dipping her skinny body in a darker hue. Not only do they come in different shapes and colors, but they have distinct features — eyes, hair, noses — too.

“That’s the message kids need to see, that people come in a range of sizes.”

Now, if only the focus could shift away from her appearance, developmental psychologist Erica Weisgram said.

“One of the things that’s always concerning about the Barbie brand in general is the focus on appearance,” said Weisgram, who has examined the impact of gender labels and gender-typed toys on children’s toy preferences.

There’s nothing wrong with being attractive, feminine or girly, she said. But girls should know those aren’t the only qualities to aspire to, Weisgram said.

“We shouldn’t look to dolls as role models,” she said, “but we know that when kids are playing, they are enacting social roles. They are playing out what they might want to do in the future.”

POWESHIEK COUNTY, Iowa -- The human remains found in rural Poweshiek County in September have been identified as Xavior Harrelson.

Days before his 11th birthday, Harrelson was reported missing from his home in Montezuma by a family friend on May 27. Several months later, his remains were found by a farmer working in a field about three miles northwest of Montezuma on Sept. 30.

La Niña ‘to emerge shortly,’ NOAA says. Here’s what it means for winter

Tailgating this weekend? Take a look at the forecasts for Iowa City, IA and Manhattan, KS