CLIVE, Iowa – A final push is underway to bring in more money for Carson King’s viral fundraiser benefiting the University of Iowa Stead Family Children’s Hospital and a concert Monday night can help boost the totals even higher.

Over the weekend the total reached more than $2.2 million in donations for the children’s hospital. The Carson King Countdown, a benefit concert being held in Clive will serve as a final push to collect even more cash.

Several musical artists are coming together for the event at the Horizon Events Center at 2100 NW 100th Street in Clive. Doors open at 4:00 p.m. and performances begin at 4:45 p.m. 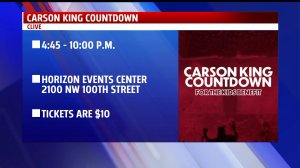 All proceeds from the tickets, which are $10 each, will be donated to King’s Venmo account before midnight – the cutoff time for the fundraiser.

Channel 13 Sports Director Keith Murphy will emcee the event with performances from Cody Hicks, Pie In The Sky, Decoy, Royce Johns, B2wins, and The Sheet. Parking is available for $5 cash.

Busch Beer and Venmo have each pledged to match the amount donated to King’s Venmo account by midnight Monday.

A sign King held up during ESPN’s College GameDay in Ames on September 14th asking for beer money turned into a viral fundraiser when he decided to donate the proceeds to the University of Iowa Stead Family Children’s Hospital.

DES MOINES, IOWA -- A 16-year-old died early Saturday morning in Des Moines from a gunshot wound and police are investigating the death as a homicide.

Police were called to Broadlawn's Medical Center at 4:43 a.m. on Saturday after a 16-year-old male arrived with a gunshot injury. The teen was taken to the hospital by a private vehicle. The victim died in the emergency room as a result of his injuries.

Class 5A, 4A Regional Finals