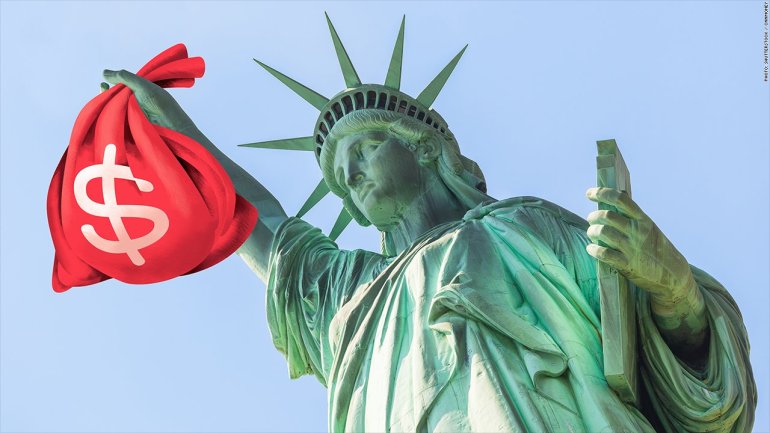 NEW YORK — Evidence is mounting that the U.S. economy is kicking into high gear.

Gross domestic product soared at 5% in the three months ended September 30 on an annualized basis, the government said on Tuesday.

To put that in perspective, it’s the strongest quarter of growth since 2003.

“Other than the first quarter’s weather-induced contraction, there’s no doubt the economy has been great this year,” said Dan Greenhaus, chief global strategist at BTIG.

Investors cheered the news, sending the stock market to record highs with the Dow crossing 18,000 for the first time ever.

Growth came across the board with business investment, consumer spending, housing, exports and government spending all showing signs of strength.

Feeling more confident, consumers ramped up their spending to a healthy pace of 3.2%, compared with previous estimates for 2.2%. With gas prices remaining so low, many expect that trend to continue through the holidays.

Defense spending was also a huge driver in the third quarter, surging 16%.

U.S. economic strength: This is the third and final reading on GDP, and the 5% figure represents an upgrade from the Commerce Department’s initial estimate of 3.9% growth.

All of that helps explain why hiring has increased dramatically this year. Employers added 321,000 jobs in November, making 2014 the strongest year for job growth since 1999.

The stellar third quarter also marks an acceleration from the very strong growth of 4.6% during the second quarter and the rough first quarter when GDP was -2.1% due to the harsh winter weather.

The solid growth could clear the path for the Federal Reserve to increase interest rates in 2015. While there is some trepidation about the first interest rate hike in nearly a decade, it would signal that the U.S. economy is actually strong enough to take off the training wheels.

But don’t expect another quarter of 5% growth to wrap up 2014. New data released on Tuesday showed that orders of big-ticket items unexpectedly declined in November, suggesting businesses are hitting the brakes on investment.

BOONE, Iowa -- While Ames and Nevada have both decided to leave pools closed for summer of 2020, due to COVID-19, there are still ways to keep your cool. One place which has a long tradition of attracting visitors on hot days, is Ledges State Park. The park features a canyon with a creek where young and old can cool off.

Park Manager Andy Bartlett of the Iowa DNR says the park is back in full operation.