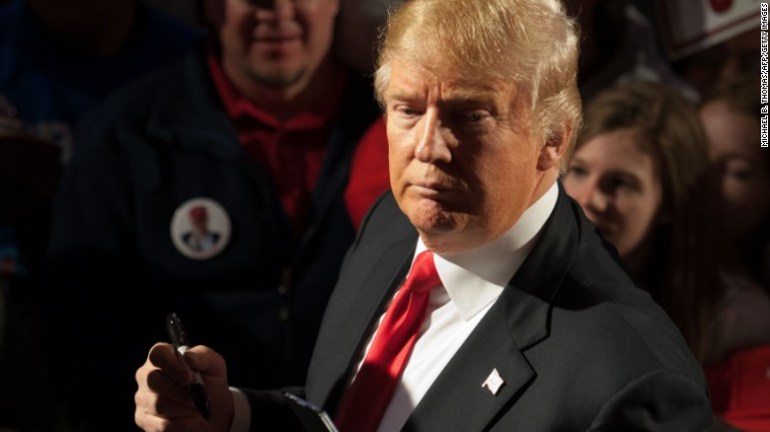 On Friday, students from Bishop Noll Institute students in Hammond, Indiana, traveled to Andrean High School in nearby Merrillville for a basketball game.

“During the course of that game, a group of Andrean students produced signs and images of presidential candidate Donald Trump and began to chant ‘Build that wall,’ at the Bishop Noll team and fans, who are heavily Hispanic,” the Catholic Dioceses of Gary, which oversees both schools, said in a statement.

Ashley Howard was at the game cheering for her cousin, who plays for Bishop Noll.

“When I looked across the gym, the signs that I saw from Andrean were the Trump fathead posters, the ESPN Deportes sign, a sign from ‘Dora the Explorer,’ and the ‘Family Guy’ Hispanic maid,” Howard told CNN. She posted two photos from the game on her Facebook page. One showed a young man holding up a large Donald Trump face cutout. The second showed a group holding a banner reading “ESPN Deportes.”

“Deportes” is Spanish for sports.

The signs, she said were coupled with chants like “Build a wall,” “No comprende” and “Speak English.”

“It was disturbing,” said Howard. “I was shocked. After a while not seeing the administration come over and say that was enough, I was disgusted. I coach volleyball at another high school. I was more disappointed in the adults.”

“There is a false perception that this was allowed to continue,” Bosak told CNN. “As soon as administrators saw that this was happening, they shut it down. No one turned a blind eye to it. This was not something to be tolerated or condoned.”

Administrators from Bishop Noll and Andrean met on Sunday to discuss the incident, she said.

“There will be repercussions for students, but due to privacy laws we can’t discuss them. But there will be consequences,” said Bosak.

‘I was born in Dallas County, just like you’

On Monday, four days before the Indiana game, about 400 miles to the west, the basketball teams from Perry High School and Dallas Center-Grimes High School played in Adel, Iowa. Nearly half of Perry’s student body is Hispanic.

Perry won the game, but on their way out of the building they faced new taunts.

“In the foyer where both teams mingled before we get to the parking lot, Dallas Center-Grimes started the chant of ‘USA, USA’ directed mostly at our Latino kids. We were able to stop that fairly quickly,” said Marburger. In response to the taunt a Perry student shouted back, “I was born in Dallas County, just like you,” said Marburger.

“Ultimately as a district, it is a learning opportunity and we must provide consequences that prevent from this happening again,” said Grimes.

Disciplinary actions aside, some of Perry’s students, Marburger said, feel like “this inflamed rhetoric is happening and it’s OK. No one is stopping it. They see it in a presidential campaign and now it’s OK for everyone to say this. It’s almost a sense that you feel that you don’t belong in your own country.”

Students take matters into their own hands

Perry student Kevin Lopez didn’t want to wait for school administrators to take action. Instead, he wrote a letter to the editor that was published by The Perry Chief newspaper.

“Monday night at the boys district game against DC-G in Adel, was the fourth instance this chant was heard. Monday night however was the first time we were exposed to such racism on social media, just to show how big of an issue this is actually becoming,” Lopez wrote.

“I urge that you stay alert to chants like “Trump” or “Mini-Mexico” and that you please take action. We know racism is alive and well, but we refuse to undergo discrimination at Iowa high school athletic events,” he wrote.

A few days after the Monday night game, student council members from Dallas Center-Grimes met with their counterparts at Perry. They wanted to apologize on behalf of their school.

“[The student council] contacted the administration the night before and wanted to do something about this,” said Grimes. “They felt this is not the image of our district or how we want to be portrayed. They stepped up and wanted to start this conversation.”

Marburger accepted the olive branch. “Dallas Center-Grimes stepped up to the plate and took responsibility for what was said,” he said.

Later that week, on Thursday, when Perry played a basketball game against a different school, students from Dallas Center-Grimes showed up to cheer Perry’s players. The Perry Bluejays are headed to the state tournament.

‘The word Trump is now becoming a form of hate’

“It’s a hate word. The word Trump is now becoming a form of hate,” Joe Enriquez Henry, Iowa chapter president of the League of United Latin American Citizens, told CNN. “It is easily used by white kids who want to send a message to dark kids. We are having to deal with hate. The only thing Trump has been successful at is making his name synonymous with hate.”

CNN calls to the Trump campaign were not immediately returned. Trump has publicly stated he plans to deport all estimated 11 million undocumented immigrants living in the United States and build a wall between the U.S. and Mexico.

Back in the Diocese of Gary, Bosak said both schools are working together to educate students and staff about diversity and racial sensitivity. She admits it is the Hispanic families who are feeling the brunt of the racially charged political rhetoric.

“I’ve received many comments from Hispanic families,” Bosak said, “They were the most disturbing [comments] because I see the level of hurt this has caused. We are about healing and forgiving. Sadly, this is what happens when we let our political system become what it’s become. It is trickling down to our children.”

IOWA -- More Iowans are now hospitalized with COVID-19 than at any other point in the pandemic and another 1,418 have tested positive for the coronavirus and another 22 Iowans have died from the virus.

The new numbers reflect testing reported on the IDPH’s COVID-19 website over the 24 hours between 10:00 a.m. Tuesday and 10:00 a.m. Wednesday. The newly reported positive cases and deaths may not have occurred during that time period, as the state has been adding backdated test results into the data.

IOWA – Less than a week from the election, Senate candidate Theresa Greenfield is pausing her campaign's RV tour after campaign workers were exposed to someone who tested positive for COVID-19 last week.

A statement from Greenfield’s communications director Sam Newton said that on the advice of medical professionals, the tour will temporarily be paused in order to protect the health of campaign workers and supporters. That means all of Wednesday’s events have been canceled, including a small business roundtable that was scheduled for 11:00 a.m. in Fort Dodge.

OMAHA, Neb. (NEXSTAR) -- Over an hour after President Donald Trump departed his rally at Omaha's Eppley Airfield Tuesday night, hundreds of supporters were left stranded in the below-freezing temperatures when transport buses were unable to navigate roads near the small airport.

The last group of supporters boarded buses around 12:40 a.m Wednesday, more than 3 hours after Air Force One departed Omaha.