DES MOINES, Iowa — About 5,000 athletes will pound the pavement this Sunday as part of the Drake Relays Hy-Vee Road Races. People from around the country will participate in a 5K, 10K and half marathon, including one man with a special mission.

Ryan Anderson is getting ready for 5K with a little help. He said, “We are going to walk that entire race.”

Lt. Dan, a five and a half month old lab, will join him on the route and their mission isn’t to win a medal. “The only thing we’re trying to do is get some training, walking long distances, being around crowds of people,” said Anderson.

Lt. Dan is training to be a service dog with the Puppy Jake Foundation, which places service dogs with veterans who have PTSD and mobility issues. Anderson said, “When they get placed with a veteran, they’re going to go with that veteran everywhere, so you want them to have that experience of going everywhere with you.”

Events like the upcoming 5K help dogs build endurance for long walks and tolerance for being around large crowds. “It is overwhelming when there’s that many people, so we ease into it. We’ll start outside the crowd and we just reward them as we get closer,” Anderson said.

People are not allowed to pet the service dogs when they are wearing their vests since they are doing important work, but Anderson said feel free to ask about Lt. Dan’s story. “It’s really neat to just go on the 5K and take him out in public and just see the people’s reactions and the kids. It’s also neat to hear the parents tell the kids about how he’s a service dog that’s going to help a veteran,” he said.

It will take about an hour for Lt. Dan to cross the finish line. He’ll be in training for several more months before becoming a service dog.

The Hy-Vee Road Race series is Sunday, April 26. You can still register at the Health and Fitness Expo at the Iowa Event Center on Friday from 4 to 7 p.m. and Saturday from 10 a.m. to 5 p.m. 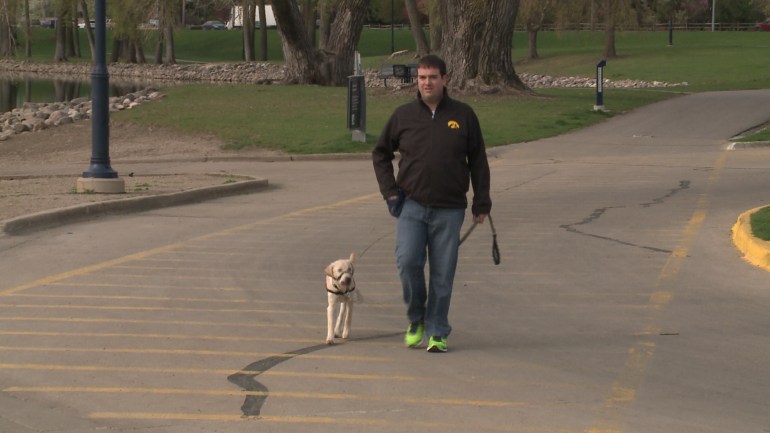 Fairgoers share what they want to see from candidates …

Fairgoers share what they want to see from candidates