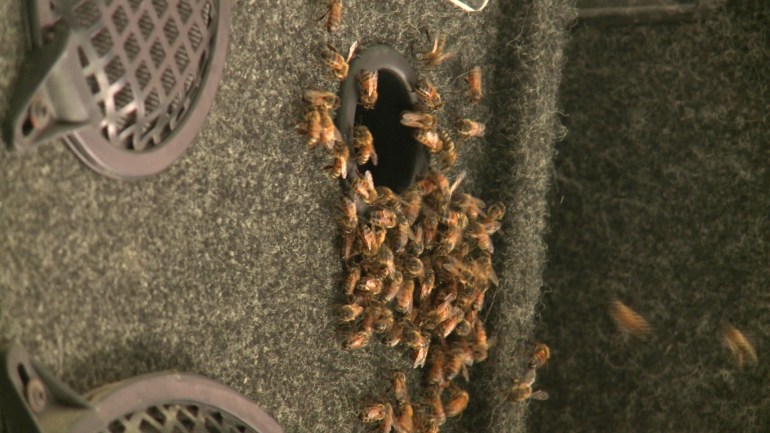 WAUKEE, Iowa — An unusual problem is buzzing around a Waukee family’s garage this spring.

“I’ve been here 15 years,” Rick Makohoniuk said. “I’ve never seen anything like it.”

Makohoniuk said about 10-20 honeybees were flying around his garage three days ago, but he and his family didn’t think much of it. Then on Monday, the family noticed a few hundred bees congregating in the garage. And the swarm kept growing.

“Today we got up and there was nothing. And about 1-2 p.m., it started getting bright out and literally thousands of bees have shown up.They’re all over our driveway and in the garage,” Makohoniuk said.

The bees have been gathering in one specific area in the garage.

“They are in an old Prodigy speaker in my garage. It’s just a garage stereo. They found a 2-inch hole in my speaker and are making a honeycomb apparently,” Makohoniuk said.

For now, the bees aren’t causing too many problems, but Makohoniuk’s 3-year-old did get stung Tuesday, so he started thinking about ways to fix this problem. Makohoniuk thought he could relocate the bees to another part of his four-acre property and possibly allow them to thrive. But city officials told him Waukee doesn’t allow beekeeping.

For now, Makohoniuk said he’ll attempt to move his speaker to a different part of his property.

“We definitely need them out of the garage,” he said.

Makohoniuk noted the issue on his Facebook, and a few friends, who live in areas where beekeeping is allowed, have offered to take them. He said he does not want to kill the bees.

Video posted by Ed Wilson captures just how loud the swarming bees are in Makohoniuk’s garage.

Police: Man Turns Himself In After Admitting He Started …