WASHINGTON, DC  —  Congressman Steve King isn’t apologizing for comments he made to the New York Times and now he’s asking his supporters to show they’re still behind him by donating to his campaign.

On Wednesday King’s campaign sent a fundraising e-mail asking for donations in response to the near universal backlash he is facing.  “As you may have noticed, the unhinged Left has teamed up with Republican ‘NeverTrumpers’ and is pulling out all the stops to destroy me,” King writes in an email with the subject line ‘Reject their labels’,  “Since they were unable to defeat my campaign in the 2018 Midterm Elections, the rabid Leftist media is currently blasting the airwaves in a pathetic attempt to paint me as a ‘racist.'”

“White nationalist, white supremacist, Western civilization — how did that language become offensive?” Mr. King said. “Why did I sit in classes teaching me about the merits of our history and our civilization?”

On Wednesday  we asked Sen. Charles Grassley if he considered King to be a racist.  Grassley says it would be unfair for him to judge King or anyone, including his own wife, because he can’t 100% know what is in someone’s heart.  “When you’re asking me to think what is in the heart and mind of an individual it would be wrong for me to draw any conclusions in the sense that I’ve been married 64 years and to know everything that my wife thinks about every little thing. So no, I can’t go any further,” Grassley said.

In his campaign e-mail, King says he is being targeted for being one of President Trump’s biggest supporters.  On Thursday morning White House Press Secretary Sarah Huckabee Sanders called King’s words on white supremacists and white nationalists ‘abhorrent.’ 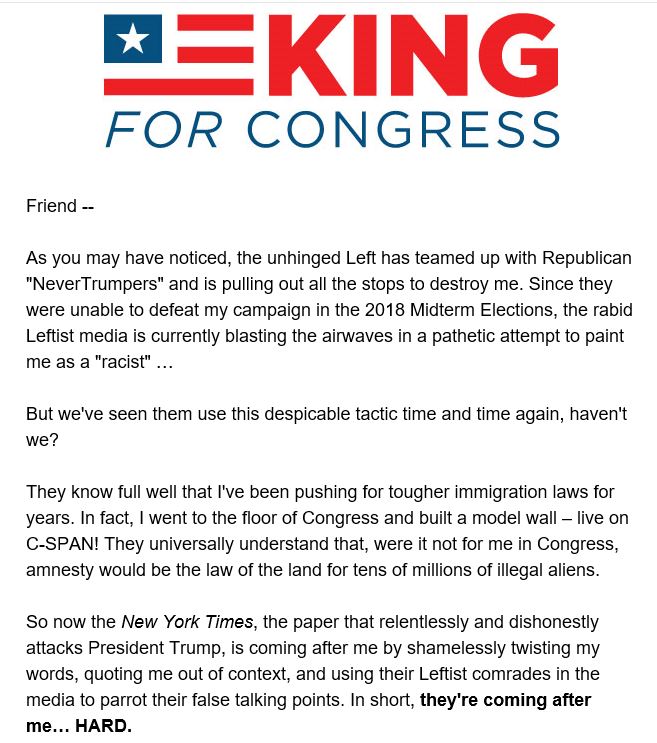