URBANDALE, Iowa – A chase on I-80 involving a semi truck Thursday morning ended in Urbandale under the 86th Street bridge, where law enforcement officers had to break out the semi’s window and tase the driver.

Sgt. Nathan Ludwig with the Iowa State Patrol says the pursuit began just east of Altoona in the westbound lanes of I-80, near the 143-mile marker. A state trooper had a semi pulled over for a commercial motor vehicle violation and was standing with the driver at the back of the trooper’s vehicle while issuing a citation. The driver, 46-year-old Ryan Tourtillott of Apple Valley, California, wasn’t happy about the situation and grabbed the citation, crumpled it up, and ran back to the cab of the semi and took off.

Tourtillott continued westbound on I-80 at speeds of 50 to 60 miles per hour and at one point stopped near 2nd Ave. but refused to get out of the vehicle. He continued trying to get away from officers but finally stopped on I-80/35 under the 86th St. bridge in Urbandale, just before going over stop sticks that had been placed by law enforcement officials. 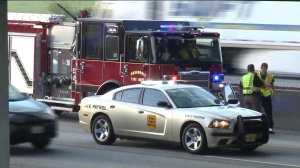 Sgt. Ludwig says Tourtillott refused to leave the vehicle and was not responding to the six officers ordering him to get out of the truck — so they used a baton to break out the window of the cab and tased him a few times. Tourtillott was transported to Broadlawns to be checked out.

Once he was medically released, Tourtillot was booked into the Polk County Jail on charges of eluding and several traffic violations in addition to the commercial motor vehicle violation he already faces.

Sgt. Ludwig says another man, who was driving a red Ford Mustang, was arrested Thursday morning for trying to get around the chase. He says the driver was impatient because of the slowed traffic and made the situation more unsafe for everyone on the road.

OKLAHOMA CITY (KFOR) - This week's All 12 Playbook features a wrap-up of the conference opening weekend and look ahead to the second week of league play.

COLORADO SPRINGS (KXRM/KSTU) -- You can expect two full moons to rise in the sky in October. You'll see the Harvest Moon on Thursday, followed by the rare Blue Moon on Halloween.

The Harvest Moon usually appears in September and bears its name because it occurs closest to the autumnal equinox. The Sept. 2 full moon occurred too early to be known as the harvest moon.

Seven electric buses will take the road this fall as 100 drivers learn how to operate the vehicles.

‘Not all wounds are visible’: Dog Helps Veteran Cope with PTSD

‘Not all wounds are visible’: Dog Helps Veteran Cope with PTSD