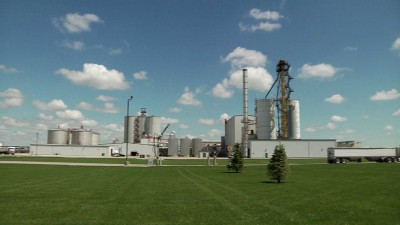 JOHNSTON, Iowa – On Wednesday the EPA mandated that 15 billion gallons of ethanol will be mixed into 2017’s gasoline supply.

The announcement comes under the Obama administration’s last year in control of the Renewable Fuel Standard.

Lucy Norton, Managing Director of the Iowa Renewable Fuels Association says this is good news for Iowa’s corn farmers, and everyone filling up at the pump.

“On an annualized basis we’re already producing 15.5 billion gallons, so we have seen record usage, we have seen record exports of ethanol, and we’ve also seen high demand for gasoline” said Norton. “It means jobs, it means competition at the pump in fuel choices, it means lower fuel prices, and it also means money coming back into our economy as well” she said.

The renewable fuel industry is responsible for 43,000 jobs. Iowa leads the nation in Ethanol production.

The increased amount of ethanol means that more gas stations will be able to use the cheaper E15 gasoline.

“We have E15 available now at many stations here in the Des Moines metro and across the state and that is growing. What consumers get in E15, if they’re driving a 2001 or newer vehicle, they’re saving five to 10 cents a gallon at the pump over E10” said Norton.

However, the news wasn’t as good for the biodiesel industry.

“Now, they are going to be forced to compete with imports of bio diesel, when we have US industry that’s primed, in a good position, and can produce what’s needed. It’s going to enable them to continue producing, but they have the capacity to produce much, much more than that; and hopefully they’ll be competing, and biodiesel will be able to compete in some different categories in the renewable fuel standard in the future” said Norton.

With President Elect Trump taking office in January there may be more demand for Ethanol.  Trump has said he would like to see more being mixed into the nations gasoline supply.

“She's a sweet girl.  She loves everyone. She loves to give hugs,” said Melanie Minton from AHeinz57 Pet Rescue.

OTTUMWA, Iowa – A Deputy Sheriff for the Mahaska County Sheriff’s Office died Tuesday morning as a result of an accidental discharge of a firearm.

According to a news release from the Ottumwa Police Department, officers responded to the 700 block of Edwards Drive at 7: 20 a.m. Tuesday on a report that someone had been accidentally shot with a firearm.

Iowa -- Governor Kim Reynolds on Tuesday issued a disaster declaration for six counties that suffered severe damage and losses in Monday's derecho storm and she expects more counties to be added soon.

University of Iowa Pushes Ahead with Plan to Reopen for Fall