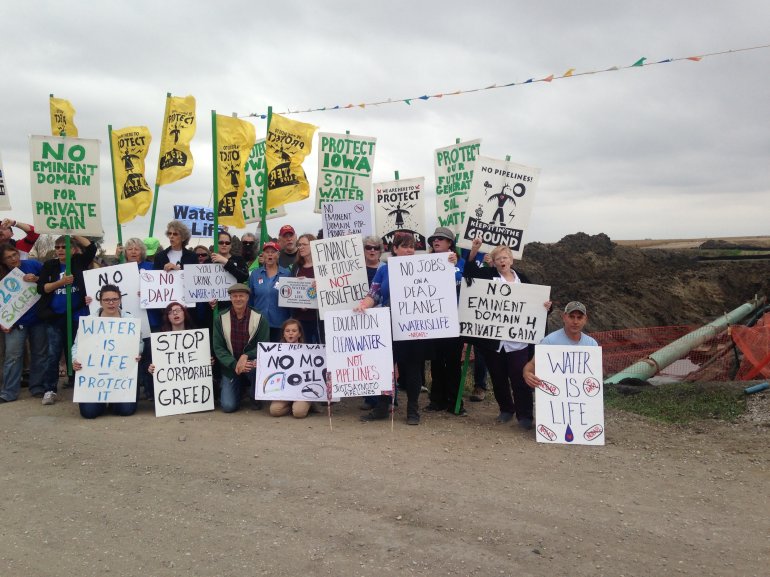 The group stood in front of the bulldozer for about 15 minutes, halting construction.

“They knew we were coming, that’s why the moved off the land owners properties we were going to stand and defend so we consider that a victory we stopped construction on those properties today” said protest leader and director of BOLD Iowa, Ed Fallon.

That is, until the county sheriff and several state troopers showed up.

“They were very accommodating, they were very polite.  They asked us to leave and said we could have a minute to have a little meeting and decide what we wanted to do, they were great” said Huising.

The protesters decided to leave the property rather than be arrested for trespassing. Police officers did not make any arrests and were greeted with chants of “give police a raise!”

The protesters say even though the protest was cut short, that every minute they stop construction counts.

For others though, the protest was much more personal.  Marisa Cummings is a member of the Omaha Tribe who feels deeply connected to the land.

“It was really emotional for me to actually see across where you can see the pit where the pipeline has been laid” she said.

While others took pictures with their signs she slipped away to pray.

“Just when I think of that image it’s really emotional so I just wanted to offer my tobacco back to our earth mother and thank her for everything that she gives us” Cummings said through tears.

After the demonstration several smaller groups split off to find other construction sites to protest.

DES MOINES, Iowa - Simone Biles is the most decorated gymnast in the world, but it's her unprecedented decision to step off the Olympic stage that's creating conversations worldwide. Tuesday night, Biles announced she would not be competing in the individual all-around competition after pulling out of the team final in order to focus on her mental health. That announcement is now shining a spotlight on the immense pressure these elite athletes face.

Dr. Carmen Tebbe Priebe is a licensed psychologist and has been working with elite athletes for more than 15 years. She also works part-time at the University of Iowa. She says performing on a platform as big as the Olympic stage can be a double-edged sword for athletes because it is exciting, but the fans can lose sight that these athletes are people too.

DES MOINES, Iowa (AP) — With coronavirus cases rising throughout Iowa and around the nation, health experts are becoming increasingly worried about next month’s Iowa State Fair, which will bring more than 1 million people to Des Moines from around the state, including many from counties with low vaccination rates and increasing prevalence of the disease.

Iowa’s biggest annual event comes at a time when giant summer events will draw crowds throughout the nation, including in states that are experiencing more virus infections due to low vaccination rates and growth of the delta variant. They range from the Sturgis Motorcycle Rally in South Dakota to the Minnesota State Fair, which typically draws more than 2 million people.

IOWA CITY, Iowa (AP) — For the second time in four years, an influential nationwide pork dealer has been sanctioned by federal regulators for illegal buying practices that cheated hog sellers out of hundreds of thousands of dollars.

Lynch Livestock, based in Waucoma, Iowa, has been ordered to stop recording false weights for hogs delivered to its buying stations, to stop altering classifications of hogs delivered, and to stop creating false scale tickets. Those practices violate federal law and result in underpayments to producers.