DES MOINES, Iowa — Democratic presidential candidate Beto O’Rourke, a former U.S. Representative from Texas, has gone from one of the candidates who traveled Iowa most often to one who has lately traveled the state among the least. “I think we’ve added to our approach,” O’Rourke told Channel 13 of the change. 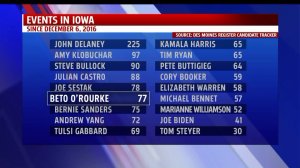 Through the end of July, only five Democratic presidential candidates held more campaign events in Iowa than O’Rourke, according to the Des Moines Register’s candidate tracker.

But since the end of July, O’Rourke’s strategy has shifted, which coincided with the murderous rampage that impacted O’Rourke’s hometown of El Paso, Texas in August.

Since July 20th–the last time during the month that O’Rourke held an Iowa campaign event–15 Democrats have spent more days in the state than O’Rourke, a substantial shift since earlier in the race. “As a national candidate for office, I want to make sure that I bring everyone in this nation into the conversation,” O’Rourke said. He said that his campaign has taken him to other states that could be important for him later in the process. He cited Missouri, Alabama, Mississippi, Oklahoma and Kansas. 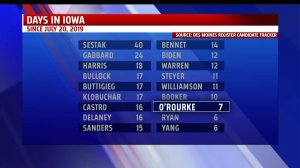 O’Rourke’s strategy to not focus on Iowa as much comes with risk. It can be difficult to win over Iowa Democratic caucus goers–who have grown accustomed to having numerous chances to meet presidential candidates in person–when a candidate doesn’t come to town very often. He stands near the bottom in the Democratic field in statewide public opinion polls, and in nearly all cases, has lost standing since the summer. The highest O’Rourke finished in a poll since July was 2 percent. Whereas, he stood between 2 and 11 percent in earlier polls.

“Iowans,” O’Rourke said while defending his campaign strategy, “…tend to make up their minds late in the process.”

He did acknowledge that he needs to finish well in the upcoming Iowa Caucuses that take place on February 3, 2020, and lead off the presidential primary process. “I think finishing in the top 4 or 5 is critical to our ability to move forward to other states,” O’Rourke said.

DES MOINES, Iowa – The State Auditor’s Office will take a close look at the deployment of COVID-19 testing “strike teams” after e-mails revealed a link between a company that received the testing and major donors to Iowa Governor Kim Reynolds.

A statement from State Auditor Rob Sand’s office, released Tuesday, said public record e-mails showed strike team testing was provided to a metal-working manufacturer, owned by donors to Reynolds’ campaign, after a personal request was made to the Governor’s office.

He defeated Democrat Mary Stewart by a vote of 5,040 to 4,074 according to the Iowa Secretary of State’s Office.

WASHINGTON (AP) — For nearly a year it was the Trump show. Now President Joe Biden is calling up the nation’s top scientists and public health experts to regularly brief the American public about the pandemic that has claimed more than 425,000 U.S. lives.

Beginning Wednesday, administration experts will host briefings three times a week on the state of the outbreak, efforts to control it and the race to deliver vaccines and therapeutics to end it.