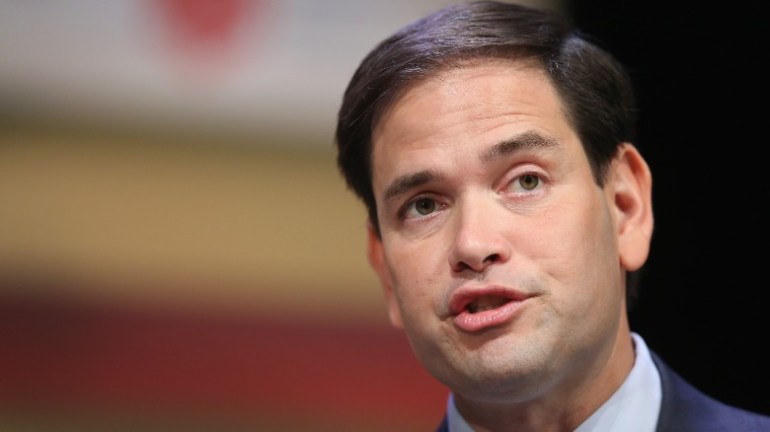 WASHINGTON — Marco Rubio said Saturday that the recent shooting of a Philadelphia police officer by a man who claimed allegiance to ISIS is a “terrorist attack.”

Police say Edward Archer, 30, ambushed and shot Officer Jesse Hartnett, 33, while he was sitting in his patrol car Thursday night. He later confessed to the shooting, and a Philadelphia police captain told CNN that Archer cited ISIS as inspiration for the attack, which left Hartnett seriously injured.

“He walks up to the car and starts firing shots. They arrest him, he tells them, he confesses, ‘I did it in the name of ISIS,'” Rubio continued. “The police chief stands up says, ‘This was the guy. We arrested him. And he said he did it in the name of ISIS.’ And then, (Philadelphia Mayor Jim Kenney) gets up and says, ‘This has nothing to do with Islam and radical Islam,'” said Rubio, who frequently hits Democrats for what he says is their refusal to properly label terrorism.

“This is ridiculous. This is absurd,” Rubio added. “This is a radical person, living in United States, who became radicalized. This is the new face of the war on terror, and it is dangerous and we need to confront it and defeat it. I will not stop until we do.”

Despite being seriously injured and bleeding heavily, Hartnett, a veteran officer, got out of his patrol car and shot the assailant in the buttocks, police Commissioner Richard Ross told reporters Friday. The gunman was apprehended by other officers, Ross said.

WASHINGTON (AP) — In his first hours as president, Joe Biden plans to take executive action to roll back some of the most controversial decisions of his predecessor and to address the raging coronavirus pandemic, his incoming chief of staff said Saturday.

The opening salvo would herald a 10-day blitz of executive actions as Biden seeks to act swiftly to redirect the country in the wake of Donald Trump’s presidency without waiting for Congress.

DES MOINES, Iowa -- The Iowa Legislature has only been back in session for a week, but lawmakers are already dealing with a positive COVID-19 case.

In an email sent to lawmakers Friday and obtained by WHO 13 News, Chief Clerk Meghan Nelson told lawmakers that someone associated with the Iowa House of Representatives tested positive for COVID-19.

The letter, dated Jan 12, says Azar's resignation is effective Jan. 20 at noon when President-elect Joe Biden is sworn in.

Hot Pockets Recalled Because They May Contain Pieces of Plastic, Glass

Trump to leave Washington on morning of Biden’s inauguration