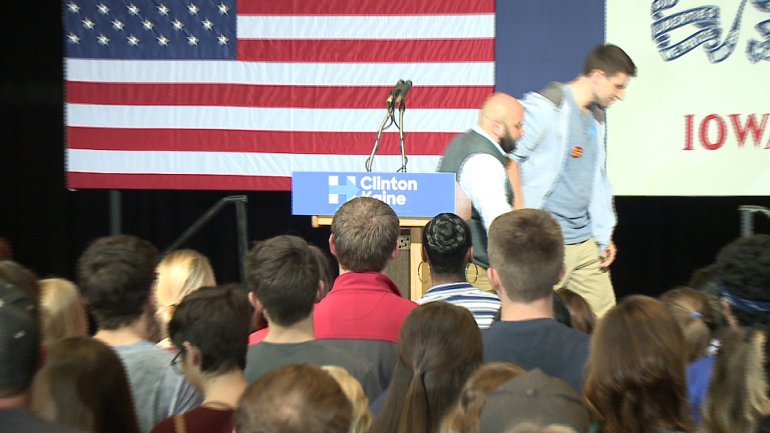 Senator Bernie Sanders came to Iowa State University to rally his supporters to vote for Hillary Clinton, but at the beginning of the rally, one of his strongest supporters on-campus derailed that message.

The president of ISU’s Bernie Sanders Club, Caleb Vanfosson, was one of the first speakers at the podium, but instead of echoing Senator Sander’s position of backing Hillary, he proceeded to bash her.

“She doesn’t care! Voting for the lesser of two evils, there’s no point!” he said before being escorted off stage by event organizers.

Prior to being taken off stage Vanfosson said that the only people who could trust Hillary Clinton were Wall Street players like Goldman Sachs.  He says the move was calculated from the start.

“They were wanting me to be this puppet boy that they could use to show that hey, Bernie people are bowing down to the establishment now, we’re all good, but we’re still angry, we’re still tired of this system of oppression that we live under and I knew I had to do it the moment I got the call,” said Vanfosson.

Afterward, those who attended the rally were opposed to Vanfosson’s decision to disregard Sander’s call to back the democratic nominee.

“To me, it’s a lot of disrespect. When someone asks you not to do something that directly involves them and you go ahead and do it anyway, what does that say about how you feel about that person and their message?” said former Sanders supporter Jessica Fears.

Other attendees said that Clinton is the only chance Sanders supporters have to make his policies reality.

While he didn’t directly address the comments, Senator Sanders made a plea for those uninspired by the Clinton campaign.

“But this is what I want to suggest to you in the strongest possible terms. Please, do not sit it out. This is something that if you sit out, and if Donald Trump wins this state by a few votes, and if those few votes and those electoral votes make him president of the united states, there’s a lot of people who are going to be dealing with that reality for the rest of their lives,” said Senator Sanders.

The latest polling numbers show a tight race between Clinton and Trump in Iowa.

Iowan a part of Monuments Men honored at Winterset …

Iowa man a part of Monuments Men honored at birthplace