DES MOINES, Iowa – Iowa Governor Kim Reynolds ended months of speculation Thursday by naming a replacement for her old position. Although, it's complicated.

"I saw a leader, someone who would articulate his positions and his vision," Reynolds said of her choice, "someone with fresh visions and someone that connected with Iowans."

Gregg will serve as "acting lt. governor", rather than "lt. governor" as Reynolds did. That could avoid a costly legal battle since there is constitutional questions about whether Reynolds--who wasn't elected governor but became governor when Governor Terry Branstad left to become U.S. Ambassador to China--had the legal authority to name her replacement. 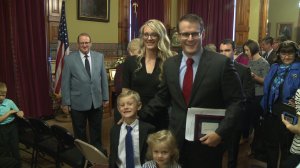 As acting lt. governor, Gregg can still perform most of the duties of lt. governor, work out of the office and collect the salary. But he can't fulfill one of the most important duties: ascending to governor if Reynolds were to leave the position for some reason. 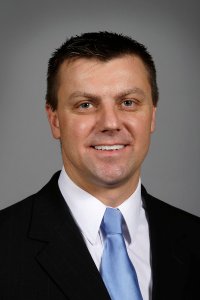 The next in the line of succession would replace Reynolds instead. That is Senate President Jack Whitver, a Republican from Ankeny.

At the news conference Thursday announcing his new job, Gregg said several times how humbled he was to have the position and said, in the end, he doesn't care whether people call him "acting lt. governor" or just "lt. governor." "You can call this whatever you want," Gregg said, "it's not going to change the way I serve."

Attorney General Tom Miller appeared satisfied with Reynolds' decision to appoint Gregg as acting lt. governor because it answered the succession question. "That is the fundamental question. That is the constitutional question and she has complied with our opinion in that regard," Miller said and added, "The constitution has prevailed, as it should."

Most Iowa students are back in class, far fewer Iowans are hospitalized with COVID-19 than were late last year, and the number of confirmed virus outbreaks at long-term care facilities are half what they once were.

New vaccines are bringing hope, but Iowa Gov. Kim Reynolds says the state is getting fewer doses of the vaccine than nearly every state and she doesn't know why. She thinks the weekly 19,500 supply will double next month, and she's moving the state to the next phase. With most health care workers and nursing home residents immunized, she is working to get Iowans 65 and older the vaccine.

WASHINGTON (AP) — The words of Donald Trump supporters who are accused of participating in the deadly U.S. Capitol riot may end up being used against him in his Senate impeachment trial as he faces the charge of inciting a violent insurrection.

At least five supporters facing federal charges have suggested they were taking orders from the then-president when they marched on Capitol Hill on Jan. 6 to challenge the certification of Joe Biden’s election win. But now those comments, captured in interviews with reporters and federal agents, are likely to take center stage as Democrats lay out their case. It’s the first time a former president will face such charges after leaving office.