GRINNELL, Iowa — Senator Elizabeth Warren spoke to hundreds of students at Grinnell College, riding a wave of success after a new poll released Friday shows her sitting at number one in the state, with 22 percent of likely caucus goers saying they will support her come February. 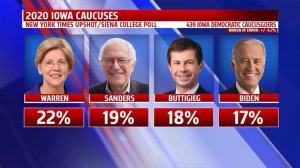 During her town hall, Warren focused heavily on her 2 percent wealth tax, but she did not speak much about her “Medicare For All” plan. In the past, it had been a pillar of many of her speeches.

When asked about her lead in the polls, Warren told Channel 13 News that she is more focused on her campaign than numbers.

Her rhetoric seemed to resonate with many students who said compared to other candidates like Senator Bernie Sanders and Mayor Pete Buttigieg, she just “gets it.”

DES MOINES, Iowa -- A petition with 829 signatures awaited Iowa Gov. Kim Reynolds Monday morning. Faith leaders from various denominations led the effort to push the governor to mandate the use of face coverings to slow the spread of COVID-19 that has killed nearly 900 Iowans since March.

WASHINGTON -- After days of whiplash over the future of TikTok, President Donald Trump said he would allow an American company to acquire the short-form video app — with a catch. Trump on Monday set September 15 as the deadline for TikTok to find a US buyer, failing which he said he will shut down the app in the country. In an unusual declaration, Trump also said any deal would have…

DES MOINES, Iowa (AP) — Iowa’s Republican governor has rejected two-thirds of the Democratic state attorney general’s requests to join multistate lawsuits, under an unusual compromise that has allowed her to repeatedly block the state’s involvement in challenges to Trump administration policies.

Iowa Attorney General Tom Miller agreed in May 2019 to seek Gov. Kim Reynolds’ approval before he would join multistate lawsuits. In turn, Reynolds vetoed a Republican-backed bill that would have prevented the state’s top lawyer from joining any multistate suit unless the governor or Legislature requested it.

Clear the Shelters: Eloise, From Pack to Pet

Pandemic Parody of ‘Goodnight Moon’ to be Released in Fall