New York Sen. Kirsten Gillibrand, a Democrat who is officially exploring a 2020 presidential run, initially spoke out about the claims of Jussie Swollett, an actor who said two men attacked him and shouted racist and homophobic remarks. Authorities are now investigating whether Swollett actually willingly took part in the incident as a publicity stunt. 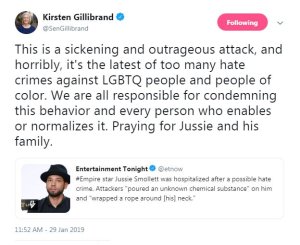 She talked to Channel 13 about the pressure to respond to breaking news developments, including the controversy surrounding Virginia Governor Ralph Northam, who faced widespread condemnation after old yearbook photos surfaced of a man in blackface.

WASHINGTON -- Negotiations over the next stimulus package intended to bolster the economy and help struggling Americans pay their bills have stalled on Capitol Hill with Democrats and Trump administration officials walking away after talks broke down on Friday and devolved into partisan finger-pointing. No additional discussions are planned after nearly two weeks of daily meetings, and lead White House negotiators Mark Meadows and Treasury Secretary Steve Mnuchin say they…

According to a release from the Governor's office, DeWine tested positive after he took a test for COVID-19 as part of the standard protocol to greet President Donald Trump on the tarmac at Burke Lakefront Airport in Cleveland.

DES MOINES, Iowa — Des Moines Black Lives Matter found out about Governor Kim Reynolds signing an executive order to restore felon voting rights like much of the rest of Iowa, on Twitter.

After more than two months of advocating in the streets, at the State Capitol and even drafting their own executive order - the group says it was extremely disappointed they were not invited to the signing.

LIVE BLOG: Aaron Rodgers speaks to media for the first time in camp

Savoring the Moment: Rodgers not dwelling on the future with Packers