DES MOINES, Iowa — A permanent solution is coming to a Des Moines neighborhood that is continuously hit hard by flooding.

Residents on 47th Street and Holcomb Avenue say the street floods every time it downpours.

Des Moines city leaders are answering their cries for help, but the solution might not be built in time for this year’s flood season.

The city plans to finish a water retention basin scheduled to be completed by spring 2020.

The basin will be buried about 15 feet below the street.

The city plans to break ground next month. Residents says it’s been a long time coming.

“What the city is doing is unprecedented. The momentum and the speed that the city is working on infrastructure; I applaud the city. I think we all should. It’s not just my street over on Maquoketa. They are working and they are looking at the entire city,” resident Jenni Klise said.

The water retention basin project is planned to be built underneath 47th Street from Hickman Road to Beaver Crest Drive. 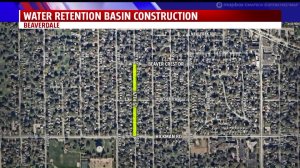 The chambers are designed to hold more water than the current outdated storm sewer drains.

The city says the entire project will cost $5.9 million, which will be paid for in part by taxpayers.

Until the project is finished, the city says anytime it downpours it’ll put a sump pump on the corner of 47th Street and Holcomb Avenue. But the city says that’s been difficult to do so far. Last weekend the city couldn’t mobilize the pump fast enough.

“The storm came in pretty fast. We all got caught surprised by it and we had no idea it would have that much rain, four to five inches. That’s just a tremendous amount, not compared to the eight to ten we got last year,” Des Moines City Councilman Bill Gray said.

The city says once the basin is built, the street shouldn’t flood, so the sump pump might never be needed again.

During the project, there will be some major road closures along the street. Residents say it will all be worth the hassle.