DES MOINES, Iowa -- Paul Morrison has just about seen it all when it comes to Drake University Athletics.

Though he retired in 1986, that was just the beginning of his legacy at Drake; he was in his office the very next day after retiring, ready to volunteer four days a week as the athletics historian. That's 70 years and counting of service for Morrison at Drake - an achievement earning him the title, "Mr. Drake."

"That's a compliment, I guess," he said. "You know, when you've been around a thousand years, they do nice things for you."

At 98-years-old, he's one of fourteen in the Morrison family to earn a degree from Drake University. He's attended 78 runnings of the Drake Relays, and Saturday will mark his 700th football game.

To put that into perspective, Morrison has attended 700 out of 1,127 Drake football games after Saturday's. And with so many games to remember, he says it's hard to pick out one highlight.

Today, he's still in his tiny office, filing history away.

"I've got an expression that you make history every day, but you don't always record it," he said. "So I've been trying to catch up on a lot of Drake history."

Tomorrow, he'll be in the stands of Drake Stadium, watching history happen, as he's done for so many years.

"It's a labor of love as I describe it, that's the only way to describe it." 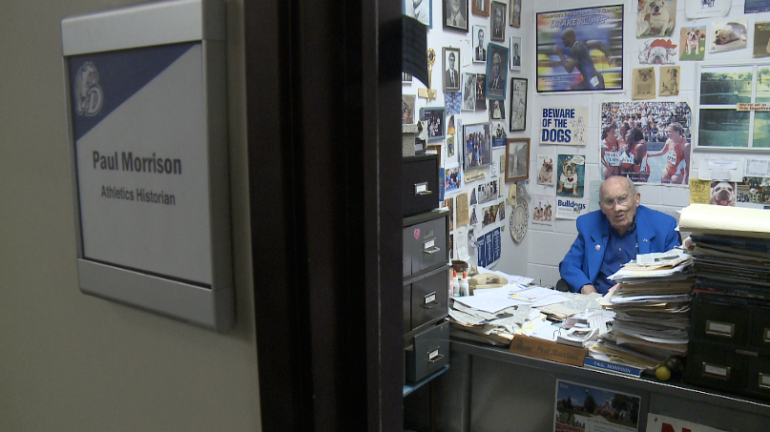 WATERLOO, Iowa (AP) — Police identified on Wednesday the man and woman who were killed after gunfire broke out this weekend inside a private club in Waterloo, Iowa.

The Waterloo Police Department identified them as Da’Curious (Dacarious) T. Burkett, 22, of Waterloo and Takeya M. Hogan-Camp, 28, West Des Moines, Iowa, according to a news release.