Ben Schuh is the man behind the “Greater Des Moines” mural on the corner of 5th Street and Locust Street. The project’s finish date is just over a month away, but all this rain is forcing Schuh to get creative with his timeline.

“Anytime I work on an outdoor project I try to assess the weather,” Schuh said. “This particular project has to be done by June 20th so everything is critical in terms of planning. The initial transfer, that you see behind me, got done [Friday] night because weather did cooperate. [Saturday] we’re not painting because it’s about to start raining, but it’s one of those things. Mother Nature is going to be there and it’s how you approach it, and whether or not it gives you a hurdle is up to you.”

Schuh worked until 1 a.m. Friday night to finish his first sketch on the building’s wall, ensuring the paint would be dried and cured before rain hit the metro once again.

He estimates the mural will take over 130 hours to officially complete. Schuh is also the mastermind behind the Exile Brewery Mural and says this one is five times the size. It’s big reveal on June 20th is a birthday present for the Community Foundation of Greater Des Moines.

After months of planning, Schuh released a preview of the mural on Instagram this week. 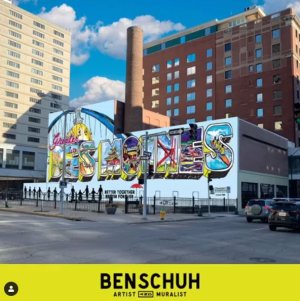 “Every public art project in Des Moines, in my opinion, has the ability to connect people with art that might not otherwise have access to it. For me, the exciting part about this is going to be the proximity to residents. There is a neighborhood building right here next door and I’ve been talking to residents and making it clear that this is their project as well,” Schuh said. “I think the biggest thing is sometimes people might look at something and think ‘well there’s just another piece of artwork,’ but if they look at it and think ‘there’s another piece of artwork for me, I think that’s something that Des Moines does really well.”

Schuh says the Papa John Sculpture Park is one of his biggest inspirations. This mural will be focused on Des Moines and some of the projects that the Community Foundation has impacted.