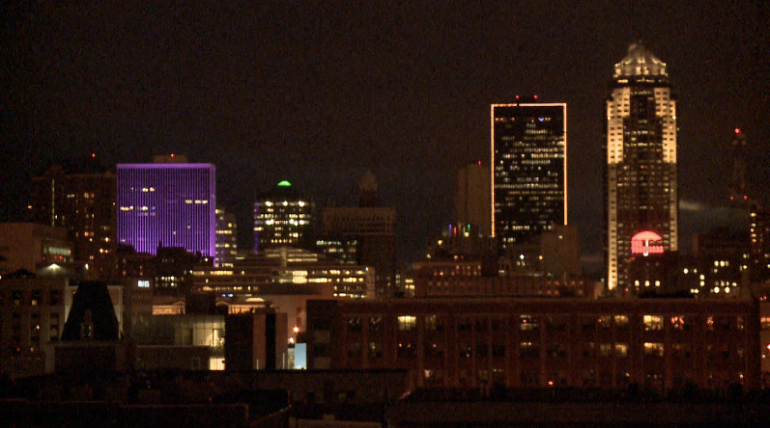 DES MOINES, Iowa – The downtown Des Moines skyline is officially a bit brighter as of Wednesday night, as the new owners of the Financial Center at 666 Walnut Street unveiled a new LED lighting system for the building.

“One of the things that was discussed was basically bringing it to the skyline in the evening, because it was the only major building that had not been lit up,” said Mark Buleziuk of Lawmark Capital, Inc., the Canadian-based firm who bought the building last February. “Today it’s the fourth-tallest building, and it just didn’t show up in the nighttime skyline, so that was the first thing we thought, ‘Hey, this is one way we could basically bring prominence back to the building.'”

The lights are part of an estimated $3 million in renovations the firm is investing immediately in the 25-story skyscraper. Long-term, the firm plans to spend a total of $5 million on the Financial Center. The firm is also renovating the nearby Des Moines Partnership building at 700 Locust Street, as well as the former Keck City Center parking ramp at 500 Grand Avenue. In total, renovations on the three buildings will cost the firm an estimated $16 million.

Kalscheur said on Twitter he was excited about “the next chapter and fresh start” for his college career with the Cyclones.

GRUNDY CENTER, Iowa -- An Iowa State Patrol trooper is dead after a standoff in Grundy Center, the Department of Public Safety announced Saturday.

Authorities identified the trooper as Sgt. Jim Smith, a 27-year veteran of the Iowa State Patrol.