MARSHALLTOWN, Iowa — The Marshalltown police officers might be getting a new look: vests that carry all of their equipment instead of belts.

The department considered switching to the load-bearing vests for physical health reasons. They posted on their Facebook page asking for community input for transparency purposes. 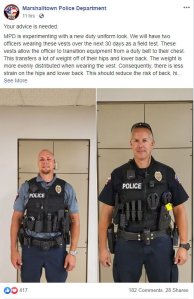 Chief Michael Tupper said many studies have been done showing that having the vests are better for officers’ backs and hips. He said from experience, he has severe pain after years of carrying heavy equipment on the traditional belt.

“I’ve been an officer for almost 27 years and my hips and lower back are a chronic problem for me now after wearing a belt for so long,” Tupper said.

Officer Ryan Dehl was one of the guinea pigs and said he noticed a positive difference after the first day.

“It’s been very comfortable. I notice most of the weight has been up here, off my waste off my hips,” he said.

Logistically, the vest functions the same as the belt but just evenly distributes the weight rather than putting all that pressure on the hips. Additionally, the load-bearing vests have bullet-prevention armor built in.

Dehl said the vest has made some of his equipment more accessible, such as his handcuffs and magazines. But throughout the day, he kept reaching toward his belt out of habit.

“If your handcuffs are in the same spot for 20-something years and all of the sudden they’ve moved, you need to start training so you don’t have to think about where you’re going to find the equipment,” Tupper said.

While it might take some adjusting, Tupper said it is worth it if his officers will have less chronic pain from their belts.

“If it helps our overall wellness of our officers, it’s a good thing,” he said.