LAKE CITY, Iowa -- Cheering on the Iowa Hawkeyes at the Rose Bowl is a special experience for any fan, but one Iowa family on their way to the Golden State says this is something "spiritual."

Channel 13 first aired the story in February of Andrew Lauver, a young man from Lake City who wrote daily letters to the love of his life, Chelsey Henkenius. Lauver planned to propose, but Chelsey died in a car crash just a few days after Christmas 2014.

"The first few minutes of the day ... can be the hardest because you just wake up and think to yourself, it's a new day and she's going to be there, but she's not,” Lauver said in February.

A year later, Lauver and Chelsey's family are fulfilling one of her dreams: Going to the Rose Bowl.

"In 2013, we were watching some of the bowl games, Chelsey and I, and she had said that someday when she was out of school that she wanted to take her dad to the Rose Bowl,” Lauver said.

So Lauver is taking Chelsey’s dad, mom and brothers to the Rose Bowl in her memory. 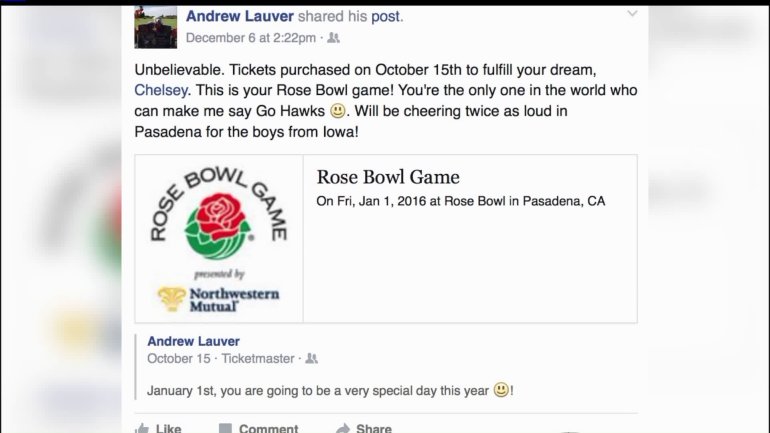 Lauver said he bought the tickets in October before even knowing if Chelsey’s favorite team, the Iowa Hawkeyes, would be playing.

"As time went along, the Hawkeyes kept winning and they kept winning, and now they're in it. So, it's just a dream come true from that standpoint,” Lauver said.

Their flight out of Des Moines canceled Tuesday, so the family found themselves on a road trip through Denver.

"I'd say there's a lot of divine intervention that's taken part in this trip, and maybe there's a reason we didn't get on that plane yesterday morning. Maybe she's the one that's behind that as well,” said Jim Henkenius , Chelsey's father.

Waiting for their flight from Denver to California that’s scheduled for Thursday, Lauver and the Henkenius family decided to take it all in, representing Chelsey and her Hawkeyes along the way.

"I told her that I would not wear a Hawkeye shirt. She once asked if I wanted one for Christmas or something, and I said, 'Well I'm not going to wear that,’” Lauver said. “Because I'm a huge Iowa State fan … So I specifically told her that I would not wear one, and now I have four of them in my bag on this trip that I'm now wearing. So she definitely has gotten me good from that standpoint,” Lauver said.

Chasing after one girl's dream, Chelsey's loved ones will tell you that she’s never truly left them.

"It makes us feel closer to her that way, and we're living out the dreams that she has, even though she may not physically be with us, she is spiritually with us,” Lauver  said.

Chelsey's loved ones say this trip seems like it was part of God's plan for them.

WATERLOO, Iowa (AP) — Two people died from their injuries and another 10 were hurt when at least two people began shooting at each other inside a private club in Waterloo.

Police said Monday that the second person to die at a hospital this weekend was a woman from outside Waterloo, The Waterloo-Cedar Falls Courier reported. A 22-year-old Waterloo man also died at a hospital after being shot.

A coalition of farm and ethanol groups are asking the Trump Administration to finish the job on waivers.

David Geiger has more in the Agribusiness Report for September 28, 2020.

IOWA -- The number of Iowans hospitalized with COVID-19 is at a four-month high on Monday morning as the state reports 611 news positive tests and the deaths of two more Iowans from the coronavirus.

The numbers come from the state's coronavirus tracking website. The increases are based on the change in statistics over the last 24 hours between 10:00 a.m. Sunday and 10:00 a.m. Monday. The reported positive cases and deaths may not have occurred during that time period as the figures may include backdated data that is being newly recorded.

Des Moines Bar Owner Speaks Out After Getting Hit With $1,000 COVID-19 Fine

Trump Ex-Campaign Boss Hospitalized Amid Threat to Harm Self

Times of sun and clouds Precip: 0%

Des Moines Bar Owner Speaks Out After Getting Hit With $1,000 COVID-19 Fine