STUART, Iowa  —  A woman reported missing in New York earlier this summer was found safe in Adair County over the weekend.

The Stuart Police Department says officer were dispatched to the Casey’s at 708 S. Division Street at 12:44 pm on Saturday after a woman called 911 from the store.  When officers arrived she identified herself as Amber Garrison of Smyrna, New York.  Garrison had been reported missing earlier in August.

Garrison told police she was kidnapped from a truck stop in Pennsylvania back in mid-July by James Smith, Jr of Mexico, New York.  She says Smith had been holding her captive in his truck since then and had assaulted her numerous times across multiple states.

Police obtained a search warrant for Smith’s truck and took him into custody.  He is charged with 1st Degree Kidnapping, 1st Degree Harassment, Domestic Assault with a weapon and Obstruction of Emergency Communication.  He is being held in the Adair County jail on a $1,010,000 bond.  Stuart police say the investigation is ongoing as it involves numerous alleged crimes committed across numerous states.

Garrison told police she had tried calling 911 several times earlier in the day, but the caller did not speak to the dispatcher.  Adair County Dispatch confirms they did receive multiple 911 calls starting around 9:50 am on Saturday and an officer was dispatched to the area of the calls but couldn’t find the caller.

Garrison was taken from the scene to a nearby hospital for treatment of several injuries. 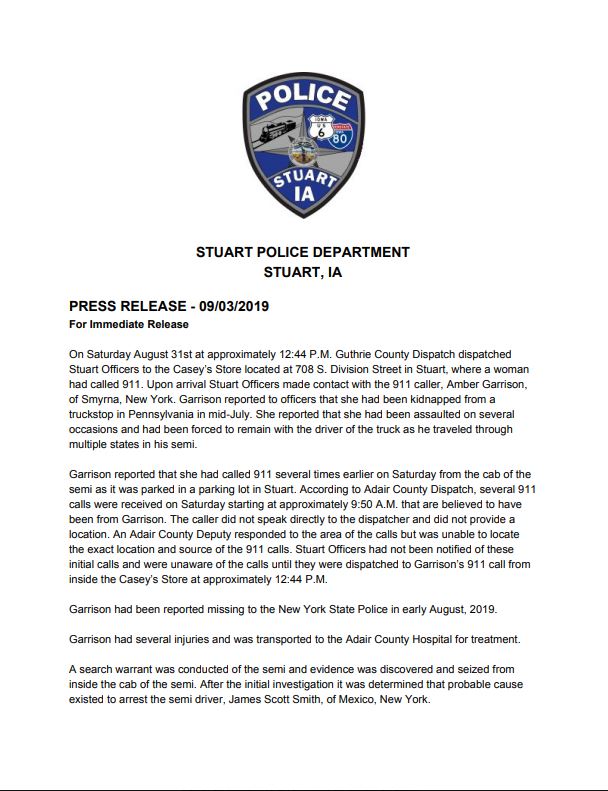 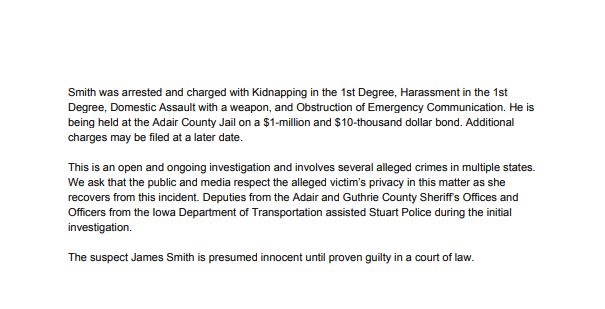