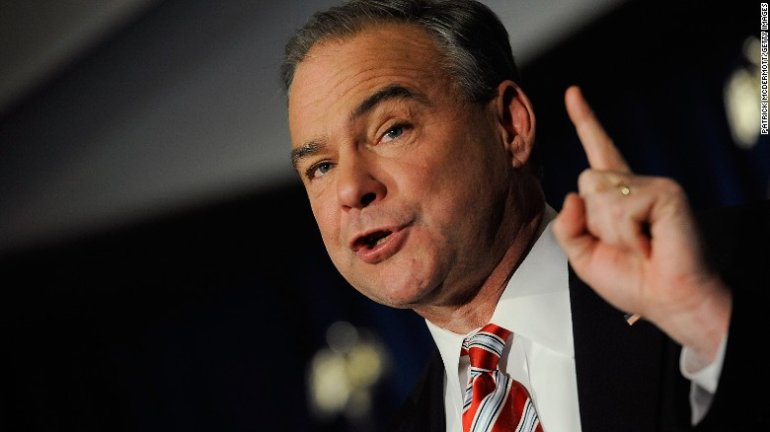 The Virginia Democrat also hit Trump for not releasing his tax returns or disclosing business ties to international entities, suggesting the billionaire is “hiding something.”

“When candidates are on the up and up, they have no problem disclosing this information,” Kaine said at a Pennsylvania organizing event here on the shore of Lake Erie. “Trump’s hiding something, and the only question is what.”

Hillary Clinton’s running mate cast doubt on Trump’s intentions, accusing him of having a “cozy” relationship with Russia.

“Don’t you think the American voters deserve at least to get to the bottom of why Trump’s relationship with Russia is so cozy?” he asked. “We have no idea how he might stand to profit from Russia or what they might be holding over him.”

Kaine called into question Trump’s willingness to stand up to Russia in the event of a potential cyberattack on the American election, saying Trump has “encouraged Russia to already get in and screw around with our elections.”

“Just imagine if Russia were to engage in a cyberattack to destabilize the American electoral process, as it has done with other nations. Would President Trump stand up to them? Well you know, we actually know the answer to that one already, because Trump has publicly encouraged Russia to commit espionage and hack his political rivals,” Kaine said, referencing remarks Trump made at a press conference in July.

“When he was challenged on it, he said, ‘Well, I was just trying to be funny.’ That guy has a weird sense of humor — encouraging Russian cyberattacks on the American political process? Wow, that’s just a laugh riot, isn’t it?” Kaine said.

A message left with Trump’s campaign Tuesday afternoon was not immediately returned.

Kaine, assuming a typical running mate’s role in leading attacks against the opposition, has stepped up his criticism of Trump in recent days. Last week, he said Trump was “pushing” the values of the Ku Klux Klan. He backed away from the comments a day later, telling reporters that Trump has some supporters “connected” with the KKK who are “claiming him.”

DES MOINES, IOWA -- Cloris Leachman, who went from the halls of Roosevelt High School to a legendary acting career in Hollywood, has died at the age of 94.

Variety announced Leachman's passing on Wednesday afternoon. She was born in Des Moines, Iowa in 1926. After graduating from Northwestern University she competed in the 1946 Miss America pageant before launching her acting career.

The Iowa Department of Public Health coordinated the July 13 testing outside the West Des Moines office that houses the administrative headquarters of Iowa Select Farms and its charity, the company confirmed to The Associated Press on Wednesday.

DES MOINES, IOWA -- Iowans are resting their back and shoulders after clearing a record-breaking ten inches or more of snow this week. The folks at Busch Beer want to help you celebrate a job well done.

Busch Beer re-launched its 'Snow Day' campaign at the start of the year. The brand chose one city in 32 different states and is tracking their total snowfall between January 1st and the first day of Spring 2021. For each one inch of snow (up to 15") the company will give you one dollar off a case of Busch brand beer.