AMES, Iowa — Video games are becoming more than just something students do in their free time on their futon in a college dorm room, they’re now reaching a competitive level. Starting this year, Iowa State University is supporting competitive gamers the same as sport club level athletes, being put in the same category as Cyclone hockey and baseball.

“We believe from a recruitment or retention standpoint offering something like this could have a major impact on us as a university. We look back at student development theory [and] we tend to point back to a lack of a sense of belongingness, or a feeling of a connection to a campus as a major driving force for students not returning to finish their degree or not coming back for their sophomore year. So we are really hoping that having a centralized space like this to be able to provide this activity will provide students the sense of connection,” Jason Vlastaras, Associate Director for Student Success, Iowa State Recreation Services said. “It will give them that activity and that outlet, and the opportunity to meet other people who are also interested in those activities. We hope that will eventually positively influence recruitment and retention on campus.”

Iowa State is currently building a space on campus for not only training for the more competitive gamers on campus, but also somewhere for casual drop-in gaming. The facility will be at Beyer Hall and is expected to be completed next Fall. 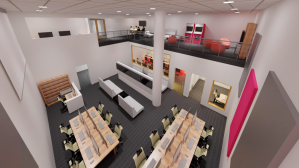 “Having a dedicated physical space for our players to practice, review games, have meetings is going to be huge for bringing our esports program up to the next level here,” Tanner Hinders, Iowa State gaming and esports club member said.

Esports isn’t new to ISU’s campus. There’s been a student-run club since 2006, but now it’s starting to get support from faculty and staff. The club now has over 20 teams competing in eight different games, and members say it’s growing almost every day.

“I know a lot of people are drawn to it for different reasons. At the end of the day I know people have fun playing these games and enjoy the competitive aspect of it without having to necessarily be super athletic,” Henry Larson, President of Gaming and Esports Club at Iowa State said. “Because some of the people who are really good at these games maybe aren’t the most athletic but they can be competitive in other sense of the word. They can be at the top of their game in other ways.”

Right now, esports is considered a sport club, but some of the members hope it will eventually gain enough recognition to receive sports scholarships.

“I’d love to see Iowa State have a full supported scholarship athletics program with esports,” Hinders said. “I think we’ve started to see it grow around some of the other colleges around the United States that are really supporting it. We’re definitely getting a lot of support from the university [now], which is amazing, but as some of the developers start to promote and sponsor collegiate tournaments within their game, I think that’s really growing the collegiate scene as well as the professional one, to help bring it into the same level as some of the traditional sports.”

There isn’t a scholarship for egaming yet, but it could head into that direction for Iowa State in the future. Some schools already provide scholarships like University of Miami (Ohio) and Georgia Southern. Vlastaras said surveys on campus shows most students partake in some sort of video gaming, and getting involved with the Gaming and Esports Club not only helps out the competitors, but also helps the University ensure their students are participating in a positive way.

“There can be a lot of negative behaviors with maybe playing too many video games or certain types of video games,” Vlastaras said. “We want to be able to provide a positive environment for people to come and participate in an activity that students are wanting to participate in, but have a social positive atmosphere to do that in, to meet other people, feel connected to campus, which we hope will give them a much richer experience while they are here on campus.”

This past spring the club hosted a big event called Open LAN where hundreds of competitors from 20 different schools from across the country came to compete. Larson said he hopes to make next year’s tournament even bigger with multiple days of competition. Their tentative date for Open LAN 2020 is April 4-5.