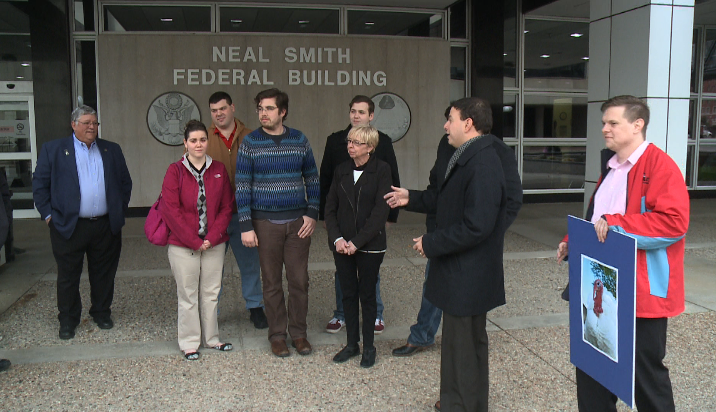 DES MOINES, Iowa – A group of Iowans presented Senator Chuck Grassley with an award Wednesday, but it likely wasn’t one the senator would want to receive, nor agree he deserves.

Organizers from the Why Courts Matter Iowa coalition, a group  that says it’s “focused on ensuring the federal judiciary is representative of America’s diverse population and ending the judicial vacancy crisis so that every American can have his or her day in court,” presented Sen. Grassley with the ‘Turkey of the Year’ award Wednesday. Though the senator was not in his office Wednesday, but rather busy at home readying the house for Thanksgiving via vacuum, the group presented the award to his staff.

“Americans and Iowans are waiting for their day in court, and there just aren’t judges to hear their cases,” said Matt Sinovic, a member of the coalition, as well as a member of activist group Progress Iowa. “Since Senator Grassley took over as Senate Judiciary Chair earlier this year, the number of vacancies on the courts has doubled.”

The award includes a picture of Pepper, a turkey the group adopted from Sanctuary Farms in Senator Grassley’s name, in order to “pardon” it prior to Thanksgiving.

“Pepper has been pardoned, so to speak, in advance of Thanksgiving, and all we’re asking Senator Grassley for is to give Americans the same access to justice that Pepper has received,” Sinovic said.

A request for a statement has been received by Senator Grassley’s office and is expected Wednesday afternoon. Check back here for updates.