DES MOINES, Iowa– When much of her neighbor’s front yard disappeared overnight, Mary Jones had trouble making sense of it. Then her fears started sinking in, consider what her family has seen happen in her own yard.

After 50 years of living on top of an old coal mine, the Jones now have an unwelcome slope. Although at one time, it was much more than just a slope.

Iowa’s coal mining industry shut down about 20 years ago, but it’s been about 75 years since it was active, so a sinkhole that was possibly caused by a coal mine has really got the attention of a woman who works for the state.

“This is a very rare occurrence. One or two a year are found to be coal-mine related,” said Susan Kozak, Chief of the state’s Mine and Minerals Bureau.

She showed us the Jones’ are in the middle of coal country, the South Des Moines Coal Company to be exact.

The map shows much of southern part of the city is actually built on top of a series of abandoned mines, but Kozak sees no reason for neighbors now to pack up and move like the coal miners did decades ago. 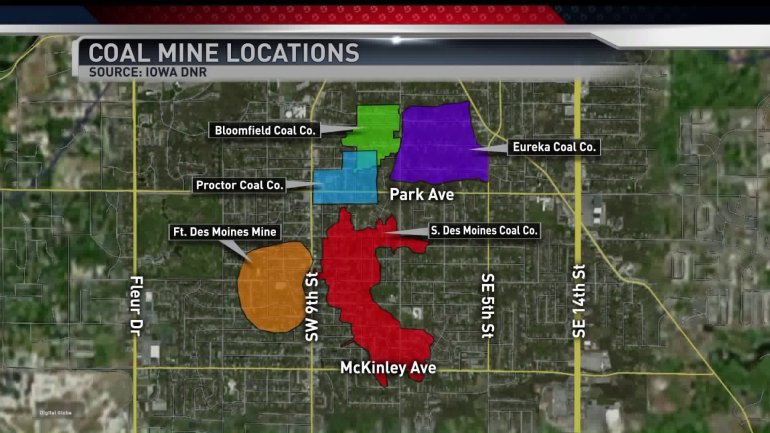 “The whole Des Moines area is very extensively mined. We rarely see these occurrences. So I don’t think it’s a time to panic,” Kozak said.

But the news doesn’t help the Jones’ frustrations.

“I gave up. Every year we put dirt in, it looks like that come spring again,” said Dan Jones, who is frustrated his mom’s lawn keeps lowering.

“Mom’s not going to worry about it, at least not much,” he said.

“A little bit, but I’m not going anywhere. That’s my little corner of the world,” she said.

Her little corner that now has a big hole in it.

Abandoned coal mines are prevalent over much of central Iowa.

Is your house on top of an abandoned mine?  Here’s a map from the Department of Natural Resources that will tell you.