LENOX, Iowa — It’s the final year in the classroom for a longtime kindergarten teacher in Lenox.

“So now when those parents walk into parent-teacher conferences we both have to have a  good laugh,” Lange laughs.

To Lange, the Lenox School District is like family and quite literally it is for her. Her son Caleb teaches third grade in the district and several of her nieces and nephews have had her in class.

“It’s really, really cool because she can tell stories about your cousins when they were little or your uncles. It’s just really, really fun,” smiles Lange’s niece, Haydin Robinson.

Lange will retire at the end of the school year with special recognition.

“I have worked with some of the best people in the world and almost all of us need one of these. You all deserve it as teachers and educators we go through a lot but it’s the best,” said Lange as she accepted the Golden Apple during a school-wide assembly. “You touch a lot of lives and you touch a lot of hearts. Sure, there are the days where you think, who did I touch? And you question that but in the long run you know that you are making a difference.”

You can check out all the other Golden Apple Award winners here.

A fond farewell to Dan Winters

A fond farewell to Dan Winters during his final show 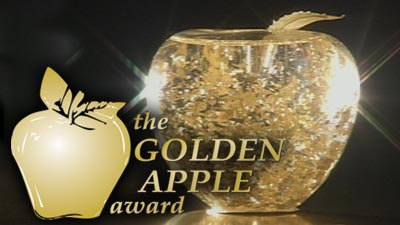 Close
You have been added to Afternoon News Newsletter

A fond farewell to Dan Winters during his final show

WHO 13 says goodbye to Dan Winters after 18 years …

What will change with new Iowa bottle bill