“This should be a testament to what kind of person he was,” said Laura Cowley, a Fort Dodge resident.

The congregation of St. Paul Lutheran and the greater Fort Dodge community is in shock and disbelief after Henderson died from a brutal assault Wednesday evening. However, the community does not want him to be remembered by the tragic way he died, but the beautiful way he lived his life. 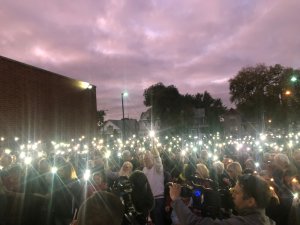 “I hope people outside of Fort Dodge can look at this and see this is what Fort Dodge is about and look past the tragedy,” Cowley said. “Because that stuff happens everywhere but this doesn’t and this is what we’re about and that is what he was about.”

Congregation members described him as a “once in a lifetime” pastor. But for his family, it is an even more irreplaceable loss.

Two of Henderson’s granddaughters, Ella Lovin and Kalyn Willingham, said they will miss his big hugs and ability to comfort them when they needed it.

“He was always there if anyone ever needed help. He was the best grandpa ever,” Willingham said.

Lovin said she was glad to see how many lives he touched at the vigil and prayer service.

“I’m glad everyone here got to know him because he was such an important person in my life. I don’t know what I’ll do without him,” Lovin said. “I cherished every moment I had with him and I wish there would’ve been more of them. I wish there was more time with him.”

The entire community said they wish they could have more time with Henderson, whether it was one last sermon or a signature heart-to-heart conversation. For the Fort Dodge Police Department, he also served as a chaplain and resource for officers during difficult times.

One officer speaking said, “he was there for us in our times of struggle, defeat and mourning.”

Henderson frequently helped officers facing adversity, and often came for ride-alongs. Henderson was with officers when Olivia Ferris got in her first car accident at age 16 and helped consult her.

“He was there for me when my mom couldn’t be there and was just so good at comforting me and telling me everything would be okay,” Ferris said.

Others at the vigil said that was the type of man Henderson was, he loved to help others.

“That’s what he did. He was there for people like that all the time,” Crowley said. “I don’t think there’s a person in this town that he hasn’t impacted in one way or another.”

Granddaughters Lovin and Willingham, both from different states, said they are taking comfort in seeing all the lives their grandpa touched.

“I loved him so much and I’m glad that everyone got to see his gift and we’re supported in this and we’re all together,” Lovin said.

MITO, Japan (AP) — The number of coronavirus cases topped 20 million on Tuesday, more than half of them from the U.S., India and Brazil.

Health officials believe the actual number is much higher than that tally kept by Johns Hopkins University, given testing limitations and the fact that as many as 40% of those who are infected have no symptoms.