ANKENY, Iowa — A homeowner says he’s paying close to $100 more on his electric bill after moving to a similar-sized house right across the street.

Rick Fleener said he paid Mid-American Energy $133 a month for gas and electric when he lived in a neighborhood west of Delaware Avenue on the northeast side of Ankeny.

In December, Fleener moved across the street about a mile east to a different neighborhood. He now pays $166 a month for electric to his new neighborhoods provider, Consumers Energy. Fleener estimates he is spending 30 percent more for energy per month.

“We had no clue. It’s not like we chose the co-op. We didn’t have a choice,” he said. “We just assumed I guess and maybe that’s our mistake. Mid-American is all we’ve ever had in Ankeny.”

The boundary lines are determined by the Iowa Utilities Board. The City of Ankeny’s electrical service map shows Mid-American Energy services the majority of its residents, shown in red. The green shaded zone belongs to Consumers Energy. 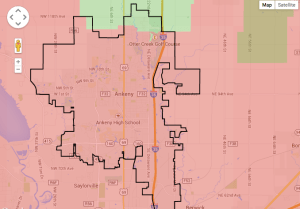 “We’re both in the business of providing electricity but there is a difference in how our rates are developed and a lot of that has to do with density,” said Consumers Energy General Manager, Jim Kidd.

Consumers Energy is small rural co-operative company. It charges $30.50 for a month in services fees in addition to 12 cents per kilowatt-hour, to keep up with the larger investor-owned companies. Kidd says this particular area of Ankeny used to be rural which is why they began servicing there. The company serves 6,000 customers statewide.

Kidd said the rates likely won’t fluctuate, “you have to try and keep that balance you could let the system fall down and not have any reliability and cut-rate but then someday someone is going to have to pay a lot more.”

In comparison, Mid-American serves around 740,000 customers and charges them nine cents per kilowatt-hour and a service fee between $8 and $9.

Had he known, Fleener says he would have second-guessed his decision to move.

“I wish they could move our house back across the street so we could have Mid–American for our service,” he laughed.

Energy companies say it’s possible for homeowners to change their providers but it can be a lengthy process. It requires customers to make a mutual agreement with the energy company and the Iowa Utilities Board.