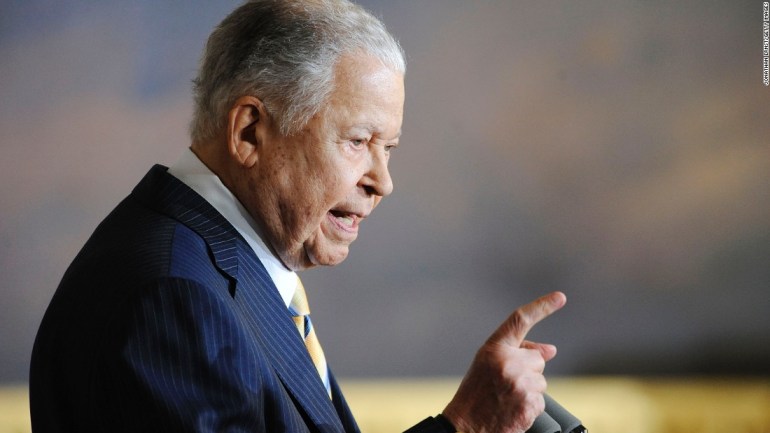 Edward Brooke — the first African-American to be popularly elected to the U.S. Senate — passed away Saturday, according to family spokesman Ralph Neas and the Massachusetts Republican Party. Brooke was 95.

Brooke served in the Senate from 1967-1979 and has often been heralded by both parties as a trailblazer. He is the only African-American to be elected to a second term.

“When he ran for statewide office in Massachusetts, and one reporter pointed out that he was black, Republican, and Protestant, seeking office in a white, Democratic, and Catholic state — and also, quote, ‘…a carpetbagger from the South and…poor’ — Ed was unfazed. It was, to say the least, an improbable profile for the man who would become the first African American state attorney general, and the first popularly elected African American senator,” President Barack Obama said during a 2009 ceremony when he was awarded the Congressional Gold Medal.

Brooke grew up in a racially divided Washington, D.C. and after graduating college he served in the Army during World War II later receiving a Bronze Star. After his military service, he moved to Massachusetts and attended law school. Later he would enter politics — first winning the position of Massachusetts attorney general in 1962. Four years later he ran for the Senate and won.

“Massachusetts has a history of sending giants to the United States Senate, great statesmen like Quincy Adams, Webster, Cabot Lodge, and Kennedy. We count Ed Brooke among them. He carried the added honor and burden of being ‘the first’ and did so with distinction and grace. I have lost a friend and mentor. America has lost a superb example of selfless service. Diane and I extend our deepest condolences to the Brooke family,” Massachusetts Gov. Deval Patrick, a Democrat, said in a statement Saturday.

While in the Senate he played a key part in the passage of civil rights and low-income housing bills earning him the title “Mr. Housing.”

He took some liberal positions while he served his two terms in the Senate and at times opposed three of President Richard Nixon’s Supreme Court nominees.

Sen. Tim Scott, of South Carolina, the only black Republican serving in the Senate, said he was “deeply saddened” by the news Saturday, on his Twitter account.

“Deeply saddened by the loss of Senator Edward Brooke. He was a true trailblazer; those of us who followed cannot thank him enough,” Scott tweeted.

The popular Brooke faced some controversy at the end of his Senate tenure after a probe of his personal finances following a divorce. “It was just a divorce case,” he told the Boston Globe in a 2000 interview. “It was never about my work in the Senate. There was never a charge that I committed a crime, or even nearly committed a crime.”

Brooke passed away early Saturday morning at his home in Florida of natural causes according to Neas.

Washington, D.C. -- Senator Charles Grassley says just because he wouldn't schedule a nomination hearing to replace Ruth Bader Ginsburg during an election year, he won't oppose Senators Mitch McConnell and Lindsay Graham from doing so because they are in charge. The Senator clarified the logic behind his apparent reversal in a call with Iowa reporters on Thursday.

In 2016, Grassley was Chairman of the Senate Judiciary Committee when he refused to hold nomination hearings for President Barack Obama's Supreme Court nominee, Merrick Garland, to replace the late Antonin Scalia. Grassley said at the time that the decision on the next Supreme Court nominee should be made by the next President since Scalia's death fell within an election year.

Oscar Sanchez, 33, was arrested this week in Marshalltown. Police say they were alerted on Monday that a man claiming to work for an insurance company was contacting residents and asking them to make a deductible payment of $1,000. Police say he was successful in getting payment from several residents.

LOUISVILLE, Ky. (AP) — A Kentucky grand jury on Wednesday indicted a single police officer for shooting into neighboring apartments but did not move forward with charges against any officers for their role in Breonna Taylor’s death.

A grand jury announced that Officer Brett Hankison was charged with three counts of wanton endangerment in connection to the police raid on the night of March 13.

1 officer indicted in Breonna Taylor case; not for her death

Late-Stage Study of First Single-Shot Vaccine Begins in US

1 officer indicted in Breonna Taylor case; not for her death