DES MOINES, Iowa -- Many Drake University students have mixed feelings about the news surrounding the racist letters investigation and some students of color say they still don’t feel safe.

Drake Student Morgan Coleman said this problem of racism on campus goes way beyond the notes regardless of whether they were real or fake.

"After painting painted street black there's been a lot of conversations and that's the whole point. We wanted it to be a conversation piece. We wanted students to talk about it in their classrooms and to kind of get to the root of the problem," Coleman said.

She said there is still a lot of work to be done.

"Racism manifests itself in many different ways. And although I cannot speak personally, and nobody can speak personally, to the motives of either individual who sent either set of notes, I do think that it shows that white supremacy is a huge problem and we have to actively work to combat it," Coleman said.

"If you're an outsider and you see that symbolic thing broken and chipped, I mean I would push it aside," Cornejo said.

He said that's the reason why he and others must continue fighting so that the problem doesn't get pushed aside again.

"There's a lot of students that felt very afraid and are still very afraid regardless of who sent whatever note," Coleman said.

Cornejo said he is one of those students who feels unsafe and there is one thing that could start the process of regaining some sense of safety.

Coleman said she still has hope for change and the students who started the movement don’t plan on backing down anytime soon.

The Paint It Black Project also released a statement Friday: 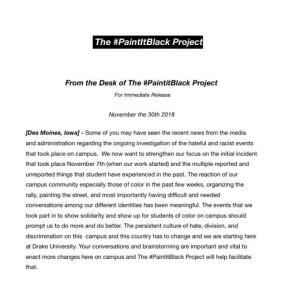 POLK COUNTY, Iowa -- A mandatory curfew is now in place in Polk County until further notice.

The Polk County Board of Supervisors met over Zoom Sunday night to vote on the measure.