PLEASANT HILL, Iowa — The Department of Human Services (DHS) confirmed Monday it is investigating a Pleasant Hill woman convicted of child endangerment who is attempting to run an illegal daycare.

“DHS was informed of the Facebook posts by Cindy Holt and have initiated a complaint intake on her illegal operation. The local field office is aware and have assigned the case,” said a DHS spokesperson.

Cindy Holt and her daughter, Amanda Holt, previously ran a licensed in-home daycare in Pleasant Hill. In 2016, a mother took her baby to the hospital for bite marks, saying the injuries happened at the Holt’s daycare.

Two years later, with her probation complete, Cindy Holt is now posting her daycare openings in Altoona. She is using different aliases but saying the same thing, stating she already has a small daycare with five children and is looking to expand. 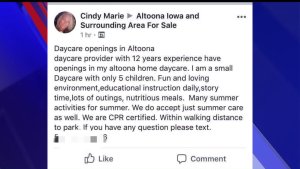 According to DHS, Holt was revoked and prohibited from having involvement in child care in September 2016.