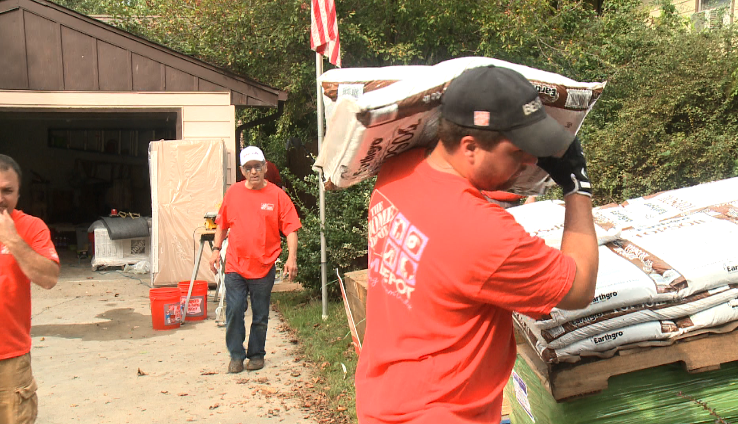 DES MOINES, Iowa – Larry Contri has lived in his house on SW 10th Place in Des Moines since the 1950s; in that time, he’s enjoyed do-it-yourself projects to keep himself busy. But after undergoing open heart surgery recently, he’s been unable to complete several projects needed to keep his older home safe and accessible.

That’s where Home Depot and the Bondurant American Legion Post 396 came in.

Knowing Contri was an Army veteran, serving in the Korean War, more than 30 area Home Depot associates offered to re-model his home for free. It’s part of the store’s fifth annual Celebration of Service campaign, a nationwide effort led by Team Depot – the Home Depot’s associate-led volunteer force. Between now and Veterans Day, Team Depot volunteers will complete projects for veterans in communities across the nation, with a focus on senior veterans who need modifications to their home.

Thursday, the Home Depot volunteers, along with the Bondurant American Legion Post 396, created a safe and accessible patio, replaced a retaining wall, repaired a storage shed, installed a new kitchen floor and countertops, and added a built-in desk for Contri. They also trimmed hedges and trees, created a new flowerbed, added a back-splash in the kitchen, and painted walls inside.

“I don’t know why I was chosen, words can’t explain how I feel,” Contri said.

Legends American Grill catered lunch for the volunteers, as well, and retired Col. Bob King, Director of the Iowa Department of Veterans Affairs, came by to make several remarks. At the national level, The Home Depot Foundation will donate $1 million to veterans causes for customers who share their support for veterans and volunteerism.