DES MOINES, Iowa — St. Patrick’s Day is right around the corner, and for 40 years the Des Moines metro has celebrated with a parade. It’s solely funded by the Friendly Sons of St. Patrick group here locally, but with rising costs, the group says they are running out of ways to keep the parade afloat.

“Some of our largest costs are everything from the parking meters that are now charged that we didn’t have that far back, police presence has grown because of the size. A lot of it has to do with the safety of the parade. The fencing that we put up every year and take down is a huge expense to us, but it’s something, as the Friendly Sons, we volunteered to do because the crowds were getting so big. It was just getting dangerous,” said Tony “T-Bone” Schmid, president of the Friendly Sons of St. Patrick of Central Iowa.

The parade started with just a few hundred attendees, but now over 20,000 people show up annually, according to Schmid. The price skyrocketed as well, costing the small group nearly $30,000 this year.

“This year was really tight for us. Last year was tight. The last few years have been. Our group basically donated money for years to charities, local charities, and have now, basically everything we bring in helps to support the parade,” Schmid said.

Schmid didn’t know if this year’s parade would happen until his group finally got enough money last week. The Friendly Sons aren’t giving up, finding a new way to raise funds this year with a pre-parade tailgate party. They hope funds from that event, coupled with other donations and sponsorships, will keep this yearly tradition alive.

“The whole community loves the parade. When you have 20,000 or 30,000 people coming down that day just to watch the parade from surrounding communities, it’s a big deal,” Schmid said. “I know people who have been coming to this parade since they were little kids and now they bring their grandkids to this parade. We really want to keep this going and we want to do whatever we can to keep it going.”

The tailgate party will start at 8 a.m. on St. Patrick’s Day at the corner of 13th Street and Grand Avenue downtown. It will cost $5 to enter. There will be food, drinks and live music.

The St. Patrick’s Day parade is one of the few that still throw out candy. For more information about the parade and how you can donate, click here. 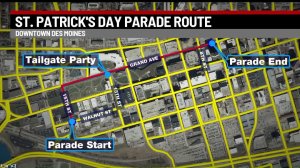