DES MOINES, Iowa – The backlash surrounding a Des Moines Register reporter who discovered racially-insensitive tweets made eight years ago by the Iowa State fan behind a viral fundraising campaign continues. It has now led to an investigation by the newspaper of social media posts by one of its employees. 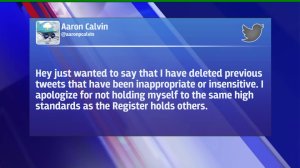 Aaron Calvin, the reporter who uncovered Carson King’s tweets from when he was 16-years-old, has since made his Twitter account protected. Calvin has been with the newspaper since November of 2018 according to LinkedIn. But before the Register employee closed his account to the public he tweeted an apology.

Channel 13 reached out to Calvin for comment on the issue multiple times, but he has yet to directly respond.

King rose to internet fame over an ESPN College GameDay sign requesting beer money when ESPN was in Ames to feature the Iowa vs. Iowa State rivalry game on September 14th.

After hundreds of dollars poured into his Venmo account, King decided to donate the money to the University of Iowa Stead Family Children’s Hospital.

Busch Beer and Venmo stepped forward to match the donations King received by the end of September. Busch Beer had also offered King a year’s supply of Busch Light with his face on the can, but after learning of the tweets King made — which were allegedly racially-insensitive — they severed ties with King.

A spokesperson for Anheuser-Busch, Busch’s parent company, tells Channel 13 the company will still honor its pledge to match the donations into King’s Venmo account through the end of the month. They will also donate the value of the free year of beer that would have gone to King, to the children’s hospital.

Venmo also plans to continue matching the donations collected through the end of September. Their spokesperson released a statement to Channel 13 saying:

“Venmo’s decision to match the money raised for the University of Iowa Stead Family Children’s Hospital was inspired by the kindness of the entire Venmo community and their desire to support a worthy cause. Our intent has never changed, and we continue to honor our pledge to support the patients, families and staff members of the University of Iowa Hospital and Clinics. “

King held a news conference Tuesday night ahead of the publication of the Register’s feature article, written by Calvin, to apologize for the Twitter posts he made eight years ago.

The Register’s story, which only included a brief sentence about the tweets in the last few paragraphs, did not include a verbatim copy of the tweets. King says those tweets quoted the popular comedy Central Show Tosh.O.

“It was brought to my attention by a reporter for the Des Moines Register and once he pointed it out and I went back and looked at it, I was…I was really upset with myself,” King said. “Obviously, you know I’ve made mistakes in my past, everyone has.  And you know, I think… I really hope people see that you at this point in my life, I’m grown…I’m more than…I’m caring, I’m generous and I just…you know… I hope that’s what people focus on.”

“I know there’s a lot of people that have been looking up to me lately and I don’t want this in any way to affect what’s going on with the hospital,” said King.

The Register is now facing backlash on social media. It has lost thousands of followers on Facebook and Twitter. A petition has also been started on change.org for the Register to issue an apology to King. It has more than 128,000 signatures.

In a Facebook post Tuesday night, King made sure to praise the Register for their treatment of him. He said, “The Des Moines Register has been nothing but kind in all of their coverage, and I appreciate the reporter pointing out the post to me. I want everyone to understand that this was my decision to publicly address the posts and apologize. I believe that is the right thing to do.”

The Register has written its own editorial in defense of its actions.  It explains that “background checks” that include looking through old social media posts are now standard policy when papers do feature stories.

As of Wednesday morning, the campaign has raised $1.37 million for the University of Iowa Stead Family Children’s Hospital. That’s up from Tuesday’s number of  $1.14 million. If you would like to donate, King’s Venmo account is carson-king-25.

You can make a mistake in your life, and still go on to do amazing things. @CarsonKing2, thank you for reminding us all of that! #IowaProud pic.twitter.com/QjbHUfgFe3

DES MOINES, IOWA -- A 16-year-old died early Saturday morning in Des Moines from a gunshot wound and police are investigating the death as a homicide.

Police were called to Broadlawn's Medical Center at 4:43 a.m. on Saturday after a 16-year-old male arrived with a gunshot injury. The teen was taken to the hospital by a private vehicle. The victim died in the emergency room as a result of his injuries.