DES MOINES, Iowa — After more than a 100 years, a fallen police officer is being re 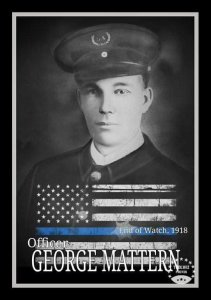 cognized for his service.

Officer George Mattern joined the Des Moines police force in 1916. Two years later, he was shot by a fugitive. The bullet, which lodged itself into his spine, later caused complications that killed Mattern.

Mattern was the third Des Moines police officer to be killed on duty and is the only unsolved officer homicide in the force’s history. Until today, Mattern was buried in an unmarked grave. Thanks to multiple donors, his grace is now marked with a headstone detailing his service to the police department.

“It’s very heartwarming and very significant for us, after a whole century we aren’t going to be able to get justice for George, but his sacrifice will never be forgotten,” said Des Moines Police Sgt. Paul Parizek. “He’s a member of our family and we really appreciate everyone who helped make this possible.”

Anthony Garza, a member of the George Mattern Committee, spent years researching Mattern’s life, along with locating his resting place in Woodland Cemetery.

“He was a real person who lived his life in Des Moines,” said Garza. “He was poor, he was trying to make the best of what he could out of his economic situation and live the American dream. Unfortunately, that was cut down for him and he was robbed of his life and I don’t want him to be robbed of his memory.”

In his research, Garza has discovered many things about Mattern, but what remains a mystery is who killed him.

Mattern has living relatives in western Iowa, who have given their blessing to move forward with the recognition ceremony.