DES MOINES, Iowa — Police have made a second arrest in connection with the robbery and kidnapping of a 15-year-old earlier this month.

Police said he and four other suspects coerced a 15-year-old male victim into their car during a drug deal at Raccoon River Park on May 11 and then robbed and beat the victim at gunpoint. The five are also accused of driving the teen against his will to an apartment complex in Des Moines.

Police said 18-year-old John Templeton was the driver. He was arrested on kidnapping and robbery charges earlier this month.

Sixteen-year-old Kashosi De Dieu and 18-year-olds Marcus Townsend and Malik Terry are all wanted in connection with the case.

Police said they are considered armed and dangerous. 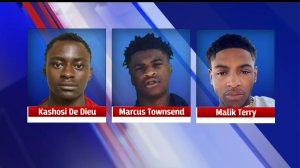