AMES, Iowa — Authorities in Ames spent over a month searching for the driver who fled the scene of a hit-and-run that killed 18-year-old Emmalee Jacobs on Dec. 14.

The Ames Police Department arrested 23-year-old Benjamin Clague on Wednesday and charged him with leaving the scene of an accident resulting in a death and failure to obey a traffic control device.

Clague has been a CyRide bus driver since 2013.

“Whenever there is an incident in Ames, our buses are all over town and with cameras on them. The police department comes to us to see our video of the incident, which is what they did that day,” said Sheri Kyras, director of transit at CyRide. 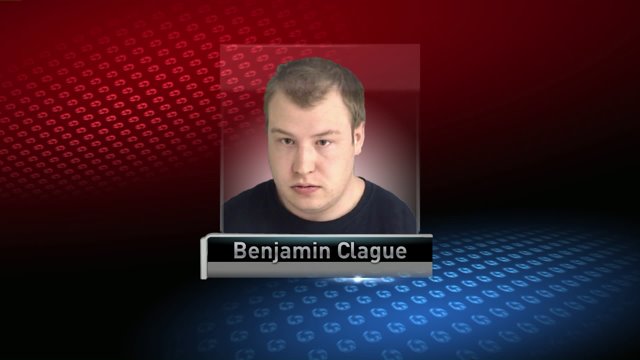 Kyras said they were blindsided Wednesday when investigators used that video to arrest the 23-year-old driver.

“For CyRide, this is a very difficult day. It’s shaking us to the core right now,” she said.

Ames Police Cmdr. Jason Tuttle said the audio from the video obtained from the CyRide bus Clague was driving the morning of Dec. 14 captures the moment the student was hit.

“You can hear the bus striking Emmalee, and that’s really what tipped the case for us,” Tuttle said.

The video shows Clague stop the bus and exit the vehicle.

“At his very next stop, he got out of the bus and did a visual inspection of the bus. Got out and walked around the bus in the rain. Our understanding is that he doesn’t normally do that,” Tuttle said. “So we put all these things together.”

Kyras said it was hard to tell by the appearance of the bus that Clague hit something.

“There wasn’t any repair. Visually we can’t see anything on the outside of the vehicle from what happened that day,” she said.

CyRide officials claim it wasn’t Clague’s lack of experience that factored into the accident.

“He drove several routes for us and that was one of them. He’s been with us for two years so he’s familiar with the route structure,” Kyras said.

Kyras said everyone at CyRide is thankful the bus camera helped solved the crime. But despite the arrest, many hearts will remain heavy.

“Our heart goes out to her family and her friends, first and foremost,” Kyras said.

Iowa State University President Steven Leath thanked Ames authorities for their work in the investigation. He also released this statement:

“Our thoughts remain with the family and friends of Emmalee Jacobs during this very difficult time. The university is working in cooperation with the city to evaluate potential safety improvements and promote both vehicle and pedestrian safety around campus and the community.”

The Story County Clerk’s Office says Clague has been released from the Story County Jail on a $10,300 bond. His first court appearance is set for Jan. 27.