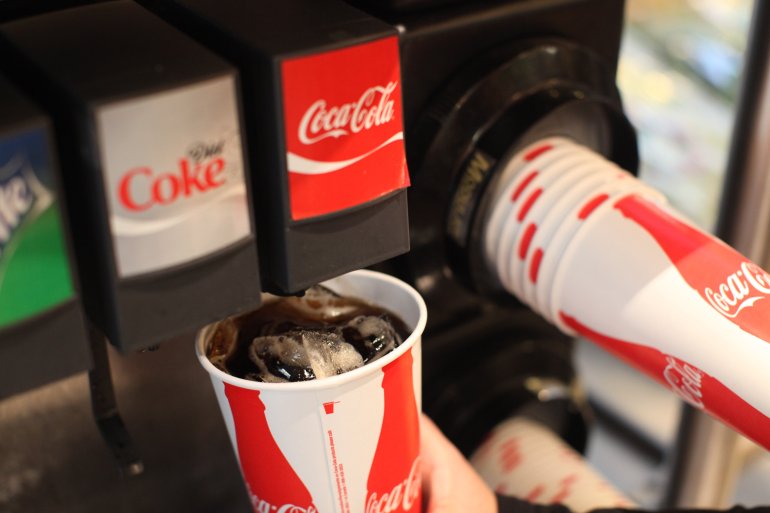 Soda makers want to cut the number of calories you’re drinking each year. The big three — Coke, Pepsi and Dr Pepper — have all pledged to reduce the number of beverage calories Americans are consuming by 20% over the next decade.

Their plan doesn’t come as a big surprise; soda makers have been under fire for some time for their contribution to the American obesity epidemic. And the companies’ motives probably aren’t totally altruistic. As more people start to count calories, consumer demand has risen for diet beverages.

“Full calorie or regularly sweetened beverage consumption is going down and has been going down in the last couple of years,” American Beverage Association spokesman Christopher Gindlesperger told CNN in June. “Our companies continue to innovate, to offer options… and consumers are taking advantage of them.”

The calories in beverages primarily come from sugar, Gindlesperger said. To cut calories but keep the taste, soda makers generally substitute in natural or artificial sweeteners.

The result is a low- or no-calorie option that satisfies your sweet tooth.

But, and this is a big but, science hasn’t quite finished testing these sweeteners’ impact on your body. How do they affect your metabolism? Do the chemicals in the artificial sweeteners pose any risk? While most agencies seem to agree that we can rule out cancer as an ill-effect, the medical community is still deciding whether diet beverages will really help you lose weight.

Let’s start with the good news: cutting calories has been shown time and again to be an effective weight-loss strategy. If you used to drink three 20-ounce bottles of regular Coke every day and you switch to a beverage with zero calories, you’re saving yourself around 720 calories a day. Do that for five days and you’ll lose a pound (or at least prevent yourself from gaining another one).

One study, funded by the American Beverage Association, found that diet soda drinkers who continued to drink soda while on a diet lost more weight than diet soda drinkers who stopped. The results didn’t surprise lead study author, Dr. Jim Hill. Those who had to give up diet soda were relying on more willpower to stick to their diets than those who allowed themselves the small indulgence without the added calories, he says.

Drinking sugarless beverages also helps you adhere to the World Health Organization’s recommendation to cut down on sugar consumption. The WHO recommends people consume less than 5% of their daily calories from sugar.

“There is increasing concern that consumption of free sugars, particularly in the form of sugar-sweetened beverages, may result in … an increase in total caloric intake, leading to an unhealthy diet, weight gain and increased risk of noncommunicable diseases,” WHO said in a statement.

Of particular concern, WHO said, is the role sugar plays in causing dental diseases worldwide.

But using sugar substitutes over a long period of time may also have a detrimental effect on your health.

“What the prospective studies actually suggest is that if you go out seven years, 10 years, 15 years, 20 years, the cohorts of individuals who are consuming diet sodas have much worse health outcomes,” study author Susan Swithers told CNN.

Why? No one knows for sure, but scientists suspect artificial and natural sweeteners trick your body into thinking it’s consuming sugar when it’s really not. The body responds just like it would to sugar, which throws your metabolic system out of whack.

“You’ve messed up the whole system, so when you consume real sugar, your body doesn’t know if it should try to process it because it’s been tricked by the fake sugar so many times,” explained Swithers.

A small study published this year in the journal Nature found that many mice and humans became glucose intolerant after eating or drinking regular doses of aspartame, saccharin or sucralose, common artificial sweeteners.

Glucose intolerance is a sign of metabolic conditions like pre-diabetes and Type 2 diabetes, depending on the severity.

Bottom line? Seeing more diet beverages on the grocery store shelves doesn’t mean you have to stock up. Try water or unsweetened tea — and save the soda for special occasions.

DES MOINES, Iowa -- Will the second time be the charm for Iowa's redistricting effort?

Lawmakers will converge on the State Capitol Thursday to look over the second non-partisan proposal for new local and congressional maps.

MONROE COUNTY, IOWA -- A garbage truck driver was injured when his vehicle was hit by an Amtrak train on Wednesday morning near Albia. According to the Monroe County Sheriff Daniel Johnson, a 911 call came in at 11:32 a.m. reporting the collision on 160th Street - northeast of Albia.

The driver of the truck was airlifted from the scene. The train's engineer was treated and released at the scene and there were no reports of any injuries among the passengers. Authorities aren't releasing the names of the truck driver or engineer at this time. The Iowa State Patrol is investigating the crash.

(The Hill) -- At least three buildings near the U.S. Capitol were evacuated on Wednesday because of a report of a bomb threat.

The Department of Health and Human Services (HHS) said in a statement Wednesday morning that a bomb threat was reported at the Hubert H. Humphrey Building, which houses its headquarters, prompting an evacuation.

Miller-Meeks says it doesn’t matter which district she ends up in, she’ll still seek reelection

Rain Precip: 100%
Close
You have been added to Morning News Newsletter

Brands intense as Iowa sets out to defend wrestling title