AMES, Iowa — As the candidates make their final push across Iowa, many caucus-goers are still trying to decide which candidate they’ll support. Democrat Hillary Clinton and Republican Ted Cruz lead their respective parties, according to a new Iowa State University/WHO-HD Iowa Caucus Poll released Monday. However, there is little room separating them from the next candidate.

On the Democratic side, 47.4 percent of likely caucus-goers surveyed said they support Clinton. That’s compared to 45 percent who said they favor Bernie Sanders. This is a significant jump from the first Iowa Caucus Poll in November, in which Sanders came in a distant second at 27.8 percent. Less than 1 percent of those surveyed in this latest poll said they’ll caucus for Martin O’Malley. 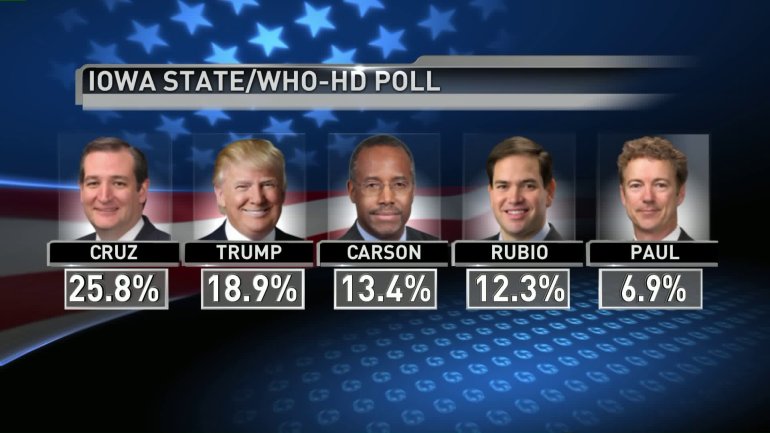 With the Iowa caucuses just days away, more than one-third (34.2 percent) of those surveyed have yet to make up their mind. And 27 percent said they’ve changed their mind over the course of the campaign. Mack Shelley, university professor and chair of political science and professor of statistics, says respondents changed their mind based on electability or after learning something about a different candidate.

“Between now and caucus night, any number of events and candidate developments can affect the outcome. Watch for any issues that catch fire just before the caucuses, and pay particular attention to any statements candidates make on important issues and last-minute campaign advertising designed to sway undecided voters,” Shelley said.

These Iowa Caucus Poll results are based on registered voters who “definitely” or “probably” will attend the Feb. 1 caucus. Trump, who had 10.8 percent support in November, gained same ground in this latest poll. David J. Andersen, an assistant professor of political science, says the question remains whether the large crowds at Trump rallies will turn out to support the candidate on caucus night.

“Trump has done an excellent job of motivating non-traditional Republicans and people who don’t typically vote to support him and attend his rallies. However, our poll has shown – twice now – that he is not the leading candidate among people who are the most likely to go out on caucus night,” Andersen said. “Trump probably has more supporters than other Republican candidates overall in Iowa, but if those supporters don’t show up to caucus it just won’t matter. It is not just popularity that wins the caucus; it is turning out your supporters.”

Shelley says it’s interesting to note that both Clinton and Sanders scored substantially higher on all three quality measures than Trump and Fiorina, although Clinton and Fiorina were nearly equal on honesty.

The economy was a top issue when respondents were first asked back in November, “What do you think is the most important problem facing the country today?” The answer to the question has since changed and terrorism is now the top concern for 21.2 percent of respondents. The shift comes as no surprise to James McCormick, a professor of political science.

“In light of the terror attacks in Paris and San Bernardino, concerns for national – and personal – security have definitely increased, as these results show,” McCormick said. “To be successful, presidential candidates will increasingly need to reassure Iowans – and Americans – that their policies will keep the country safe. Although economic concerns usually dominate the agenda in presidential elections, national security concerns are likely to be equally important for many voters throughout this election cycle.”

Four out of every 10 respondents said foreign policy was very important. As for their confidence in the government to protect citizens from a future act of terrorism, a plurality (46.5 percent) said they had “a fair amount,” 26.7 percent said “not very much,” 16.6 percent said “a great deal” and 9.5 percent said “none at all.”

The economy (18.6 percent) is still an important issue, followed by dissatisfaction with government, Congress (10.1 percent) and the gap between rich and poor (8.9 percent).

About the Iowa Caucus Poll

Iowa State’s Center for Survey Statistics and Methodology along with WHO-HD, the NBC affiliate in Des Moines, conducted the first wave of polling from Nov. 2-15. All 722 respondents in this second wave were surveyed in November.

Faculty in the Department of Political Science, the Department of Statistics, and the Greenlee School of Journalism and Communication are collaborating on the Iowa Caucus Poll. Those departments, plus ISU’s Office of the Vice President for Research, the College of Liberal Arts and Sciences and the Carrie Chapman Catt Center for Women and Politics, as well as WHO-HD, are funding the research.