Meteorologist Megan Salois had a feeling that the west-northwest crosswinds along a north-south interstate could potentially lead to a higher rate of accidents in the winter months. She contacted Andrea Henry of the Iowa DOT to confirm this suspicion. Henry did say that the frequent winds from the north-northwest lead to cars to blow across lanes of traffic on already slick roads when there is snow and ice on the interstate. Winter weather related accidents happen with more frequency on north-south roads, as opposed to east-west roads.

Henry also states that the winter usually has a higher number of accidents in general compared to the warmer months. On the positive side, winter crashes tend to be less serious with fewer fatalities. Vehicles tend to be driving slower and there is more snow in the ditches that can help cushion the crash. 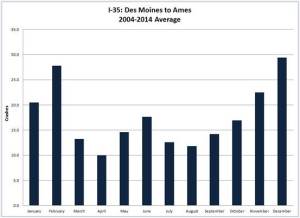 Henry had a few other reasons for the higher number of accidents along I-35 between Ames and Des Moines. You can read them here:

If you have a Weather Why for Megan, please submit it here.