I hope you had a good weekend. Sunday afternoon Sally and I were thinking…We could use one more day…it was that kind of weekend.
We are finally coming out of the holidays…Getting almost everything cleaned up etc…but we also had a lot of fun. Friday and Saturday night we had nice dinners with friends. Back to work for a full week this week.

The Statehouse is going to be a different place this year…The entire atmosphere is going to change and it starts today.
Democrats take control of both houses of the legislature in a mostly ceremonial day. I know a lobbyist or two here in Iowa…The ones who’d spent the last few years with a sympathetic ear of republican leadership are wondering what their reception will be now that the Dems are in control….Conversely I expect to see a few lobbyists we haven’t seen in the capitol rotunda the last few years. Dave Price will lead our coverage at the Statehouse today and all week long.

On the national side the US Senate gets to work today beginning it’s “First 100 hours” agenda. Correct me if I’m wrong here but …clock’s tickin… We’re already a few days onto this.
Maybe we’re just misunderstanding the name…. Do you think it’s the first “100 hours” ,means the first 100 that congress is actually working…that could take months.

Street Trial:
This may be the most jaw-dropping story I’ve ever seen. The story of this family, the children who were allegedly abused at the hands of their step-father, is one that will leave you wondering why no one ever said anything.
One of the main players, Brian street is on trial for child pornography today. In the past few months we’ve received more than a few letters from Street, in prison, professing his love for his 17 year-old step daughter. It should give you a little insight into the situation, that he thinks publicly professing his love for a child that he was supposed to be caring for, will make him a more sympathetic figure and in some way allow the public to justify his alleged sexual relationship with at least one minor. The “yuck factor” on this story is going to get higher…

Soldier Funeral:
The latest soldier to die in the war will be buried today in Ottumwa. Mark Tauscheck will cover the funeral services.

Avalanche:
Sorry if we mislead you this morning. The best information we had was that two of the survivors of avalanche would be on the Today show. Turns out…two of the survivors were on the show…but none of them were from Ames. Sorry…We went with what we thought was the right info. It’s a pretty amazing story, but I kind of chuckled this morning when one of the newtwork morning news programs led off their newscast with tips on surviving an avalanche…I can’t imagine a circumstance where,

A. Many of us would need that and
B. Any of us are going to remember that in the unlikely
event that we are trapped in our car in a freak avalanche.
There goes the media again…sensationalizing everything.
captain Feathersword?
I was about to remind Trish this was a family show when she mentioned this guy but apparently it’s a character from the Wiggles? Like many things associated with being a parent…I do not know what a Wiggle is. If you’d shown me this picture…

I would have said it was a Monkey’s reunion Photo or a recruiting poster for Up with People. There are a million crude jokes many of you could make right now…I’d like you to refrain…You know who you are.
Don’t have to wonder what those jokes are- I heard half a dozen of them from Pat and Brad during commercial breaks!
The reason we brought up the Wiggles this morning – tickets go on sale at 10am for their show March 1st at Hilton Coliseum in Ames. I made sure to include a parental warning to distract young children before we mentioned this on the air!
I’m not a huge Wiggles fan – my son prefers stuff that really rocks like Rage Against the Machine – but I have seen my share of the show, and I have to give the Aussies credit for being incredibly good at marketing ridiculous material to millions of spellbound kids across the world! It’s harmless stuff, just irritating when those danged songs get stuck in your head!! (You know – Potato, potato, potato… Big Red Car.. Dorothy the Dinosaur… sorry for torturing all of you parents who now have this nonsense in your heads!) TS
Gino’s

Just thought some of you might like an update on a WHO alum. Patrick Bell moved to Columbus Ohio a few years ago after marrying a beautiful girl from Des Moines. Her family happens to own Gino’s on the north side, and when Sally and I were in there for dinner this weekend we got an update on The two of them.
Pat still works at the station that lured him out of Des Moines in the first place. He and his wife are apparently expecting. As with most in-laws…they’d like Pat to move their daughter back to Des Moines.
Have a good start to the week.
PWD
Trisha’s turn! 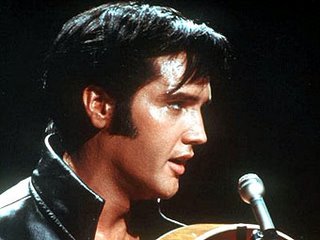 Happy Elvis’ Birthday, everyone!
He’s 72 today if you believe he’s still alive. (I don’t really, but a part of me loves to imagine – what if?)
Everyone around here thinks I’m nuts.
My Elvis thing truly is more of a fascination than an obsession.
That being said, it’s true I own a Velvet Elvis and yes, it’s hanging on a wall (not over the fireplace like I wanted it, but in the music studio.)
I have been to Graceland.
Twice.
I highly recommend you all play at least one Elvis song today and remind yourself why he’s the King of Rock.
SKATING FOR 4-YEAR-OLDS 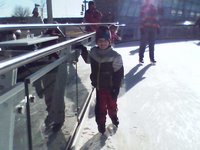 I’ll chalk this up as an idea that sounded better than it turned out to be. I took Cal to the Brenton Skating Arena downtown. Beautiful facility, beautiful day, ugly results. He had such a hard time standing up on the darned skates.. then he got frustrated and decided it was funnier to TRY to fall, and stay sprawled out on the ice, blocking the path of all the other skaters. My back still aches from lifting him up.
Still, he lost his mind when it was time to leave, and all day kept asking, can we go back to the icing skate rink??
YOU’RE THE ONE THAT I WANT
Did any of you catch this new show on 13 last night? They’re casting the new broadway production of Grease via a reality show! It’s so painful to watch people who think they’re great performers totally humiliate themselves!! The process was like most musical theatre auditions I’ve been through, so it was kind of fun to watch as a non-participant! 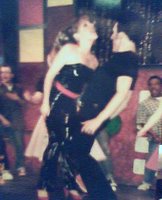 Here are a couple of shots from when I played Sandy 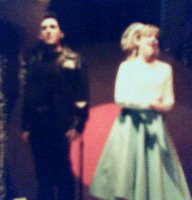 in Grease – this was about 3 years ago with a Champaign-Urbana community theatre company, right before I moved to Des Moines. I like to think I have a little bit of the good and bad Sandy in my personality…
Now I need to convince Pat and Brad to share some photos of their thespian days!!!
Hope this made you smile – see you again in the morning!
Trisha

The Future of Iowa: Rural Iowans Hoping for Change