Stolen car – deadly crash
A stolen car and an attempted police stop led to a chase and an accident late last night in Des Moines. The guy driving the stolen car lost control and hit a utility pole…That knocked out power to a bunch of northside customers last night. One of the the three people in the car died, the other two are in police custody.

Bush meets with Al-Maliki
President Bush is on his way to meet with the Iraqi Prime Minister today. This is important enough that the whole Nightly News Crew is packing up and going to Jordan to cover it. The President is also going to have to answer some thought questions from the Prime Minister after an article in the New York Times this morning. It details a memo from Bush’s National security Advisor. The memo basically says the NSD has no confidence in the PM’s government or their commitment to end sectarian violence in Iraq.

The Supreme Court is hearing a case on whether or nor CO2 (Carbon Dioxide) is a pollutant contributing to global warming. 12 states say it is and wants the EPA to control emissions of CO2 from heavy industry. The EPA contends CO2 is naturally occurring (breathe out) and so it can’t be a pollutant. Stay tuned.

Rolling Through
We had the Medicare bus out in our parking lot this morning. It will be parked in the Northwest

Community Center later this morning so you can get questions answered about the Medicare prescription drug program. A lot of people still neee questions answered. If you can get up there from nine until noon… Do it. Take your medication and these guys can feed all the information on your healthcare into the computer and come up with the best, least expensive program for you. 9-Noon at the Northwest Community Center(next to the Franklin Ave Library branch).

Inspiring Recoveries
If you missed Sonya Heitshusen’s story about wounded soldiers being treated athe Walter Reid Medical Center and its prosthetics and rehabilitation units, you really should watch online.
(We made the decision to re-air the story early in our 5am newscast today, even though we normally don’t use long-format stories in our show. It felt important enough to take the extra time and slow down a bit. I’m glad we did. Kudos to our new producer Heather for finding ways to make everything fit in this morning!)-TS
Sonya will continue an excellent series with another story tonight. When we talk about the courage and character of our soldiers on the battlefield that’s obvious. A much deeper form of both is evident in the men Sonya talked to. This is also an interesting subject because prosthetics are benefiting from the number of debilitating wounds on the battlefield. The technology advances because so many of these cases are coming out the the wars. Really interesting. Good job, Sonya and our Chief Photojournalist Mike Borland.

UNI vs ISU
UNI and Iowa State go at it on the Basketball court tonight. I always find these Intrastate

rivalries much more interesting in basketball. I think all the teams in the state are much more evenly matched in hoops. This should be the first of several good in-state games this year. Add to that the extra storyline of Greg McDermott going back to UNI for the first time with his new team. The former Panther coach will no doubt have mixed feelings as he watched the young men he recruited and coached at UNI, try to beat his Cyclones.

Vilsack for Pres.
The Gov kicked off his Presidential Campaign tomorrow. We’ll have full coverage from Mt Pleasant.
This morning we had Jeff Link on live – he’s Vilsack’s communications director. He gave us the laundry list of states they’re visiting in the next few days (New Hampshire,Nevada, South Carolina, etc. ) and I have no idea how much adrenaline it will take to keep them all going on that schedule!TS

Pat’s sorry for dissing Trish!
Tips on choosing and installing a programmable thermostat -I made the

comment this morning that it was so easy…Even Trish could install a programmable thermostat.
For the record: I am the LEAST handy man in the world.I will call someone to take care of just about any home improvement project.
Funny story: I didn’t want to mess with putting a dimmer switch in the dining room. Sally really wanted one.
After months of relentless ribbing by just about everyone, my best friend Shaun (Electrical/Chemical Engineer and all around handy guy) was over for the weekend and Sally convinced him to put one in. The problem is, he bought the wrong one, couldn’t install it and then he had to go. He put the old switch back in the wall…upside-down. Up was off…down was on. My point here is …This is why I hire people to do this stuff. Inevitably, when those of us who are lacking the home improvment gene try to fix something…we leave a part out, or put it on backwards…whatever. Support the Economy…Hire out home improvement projects.

Trisha’s turn now –
I only got mad at Pat for a couple of minutes after that crack on the air. I know that HE knows I probably am handier than he is! Not that I’m some mechanical genius, but my dad is, and he’s been able to talk me through some pretty hilarious home fix-ups over the phone!
When our thermostat went bad last winter, the furnace wouldn’t shut off and it was 89 DEGREES IN THE HOUSE! Ian was out of town so I was stuck to figure out a solution. I called my dad and he talked me through cutting apart an old phone cord to splice together some wires to make the old thermostat work just long enough for me to get out and buy a new one. The McGyver quick fix worked. Later I got the new rig and installed it by myself – and it still works! So there, Pat! 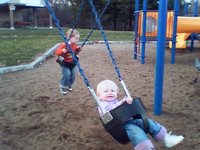 The kids and I just had to get outside yesterday because I knew what the weather was bringing next! Bye-bye, warm weather – it was nice while you were here! Cal is ready for some snow – maybe tonight!

Hope all of you have a good day,

No Damage Done to Valley Junction on Monday Night